Is Zakir Hussain using a book as a percussion instrument?

Zakir Hussain and Rakesh Chaurasia performed together in EtnoKraków Rozstaje (Crossroads) 2015. In the concert video uploaded on the festival's official YouTube channel, you can see that there is a percussion instrument on Zakir's left that looks like a thick book bound with a belt. What exactly is this instrument? Is it really just a book?

The video editor has introduced too many cuts, so I can't find any lengthy view of the instrument with Zakir playing it. Some of the instances that I could find I have listed below. All but the last one are in the first 15 minutes.

You can see that there is a percussion instrument on Zakir's left that looks like a thick book bound with a belt. What exactly is this instrument? Is it really just a book ?

Yes , it is just a thick book ! But again , it is not 'just' a book , but an Amplified book . He used this Amplified book as a Percussion instrument in several other concerts too .

Hussain always seems to have some new toy in tow—at one Remember Shakti concert, a simple frame drum and electronic snare turned him into a street-level Billy Cobham. Then there’s his amplified book.

ZH: “I might actually do that in Portland! Thanks for reminding me! When I’m with classical musicians I would not introduce any of these contemporary sounds, I just bring my tabla and play my tabla set, out of reverence and respect to the tradition and their standing in the world of music. I’m there to do their bidding.

“But with Rakesh or other younger players, I would call them and say, ‘Hey, you want to try something different, should I bring different tones and sounds?’ Not in the traditional ragas but in the lighter side of things in the evening. Once you introduce a sound, it takes you into a particular mood, thought, idea, emotion, and the melodic and rhythmic ideas take on that character.

“I carry tonal sounds with me to a gathering of musicians which I am pretty certain no one else has. I will bring instruments I can put into play which are a sonic experience that identifies what I’m doing and gives the audience different experiences when they can see what I am doing.

“It’s the same in jazz. When I first played with Herbie Hancock, I only played my tabla, and on one of the plane rides Herbie said ‘I heard you’ve got these other things, why didn’t you bring them?’—‘I didn’t think I could, you’re the master, I do your bidding.’—‘Nah, bring em!’ So on the next tour I brought them, a sound world of a whole different variety, a totally different conversation. I don’t want to push, I just want to have it in case I need it. But I would never want to double up.

Here , one of the best poses that viewer can see the amplified book kept on left side of Zakir Hussain from the video , where Zakir Hussain and Rakesh Chaurasia performing together in EtnoKraków Rozstaje (Crossroads) 2015. Also there one can see how it is arranged. 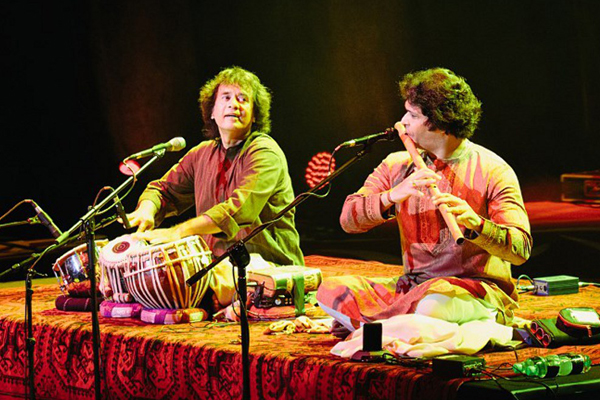 1) Here is an extract of Zakir Hussain - Rakesh Chaurasia live from the Nuits de Fourvières festival in France.

2) Some photos from Zakir Hussain and Rakesh Chaurasia perform in NYC. 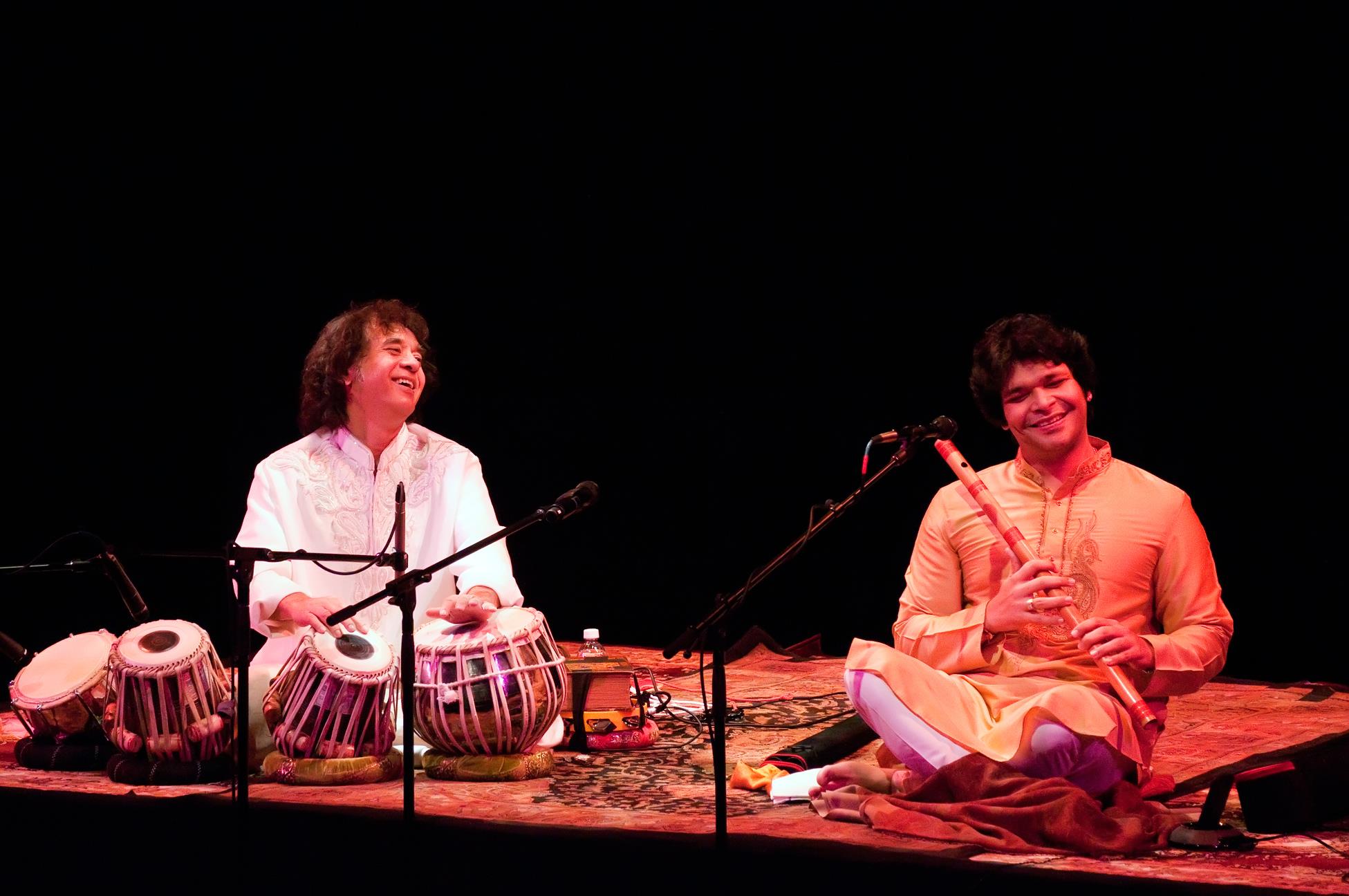 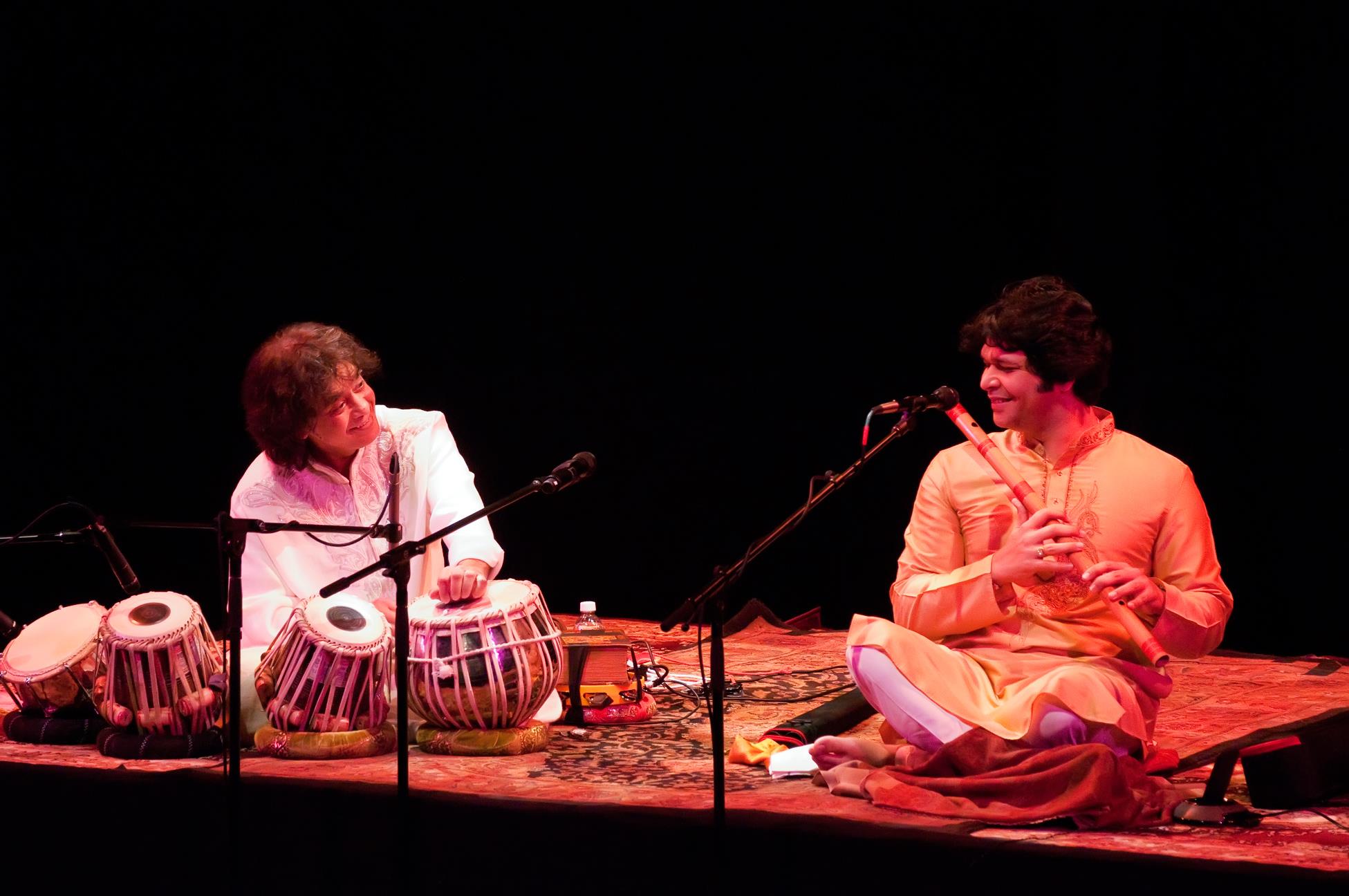 3) Some photos from Zakir Hussain performs at Bomhard Theatre on October 12 ,2012 Louisville, Kentucky . 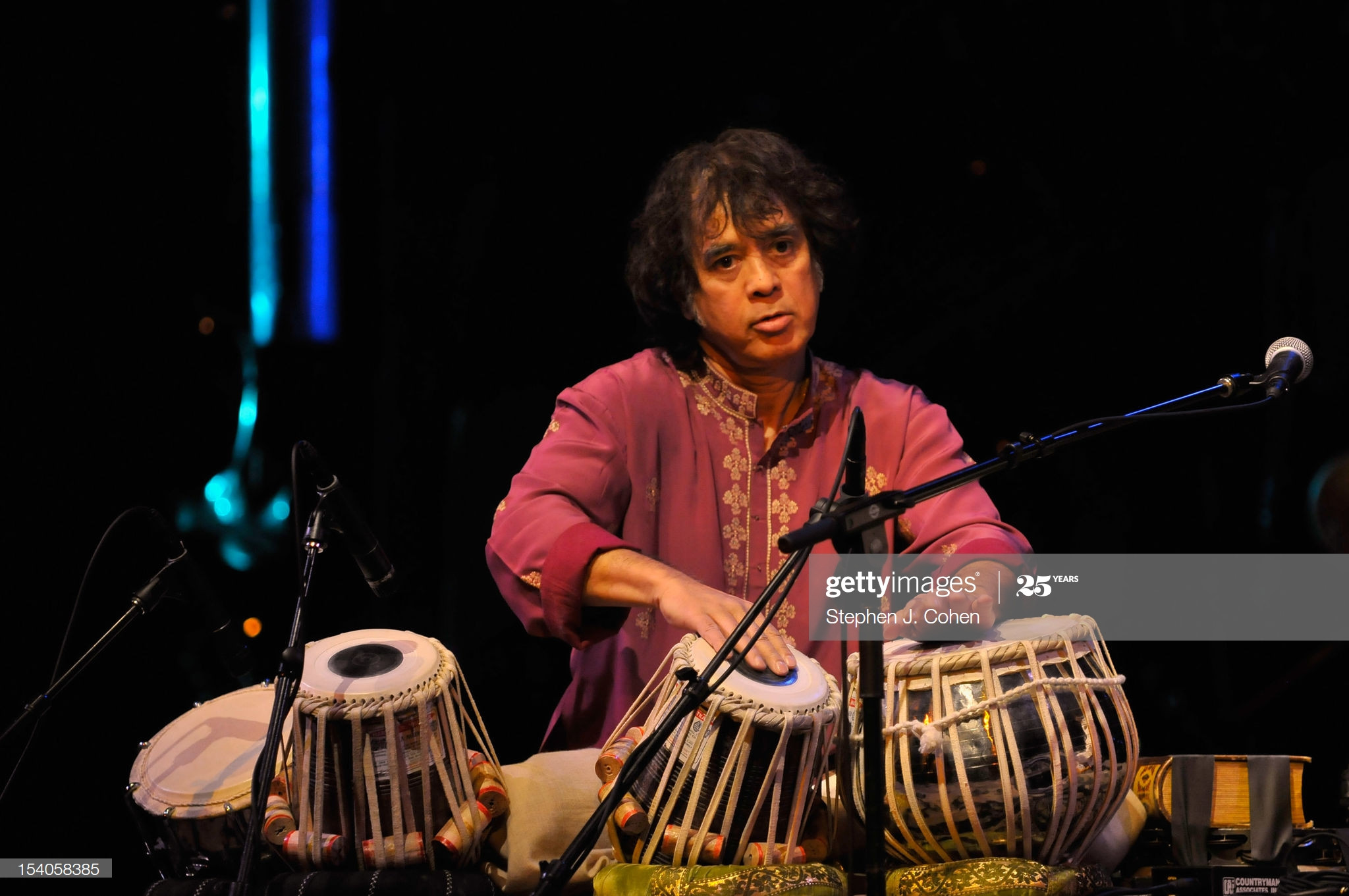 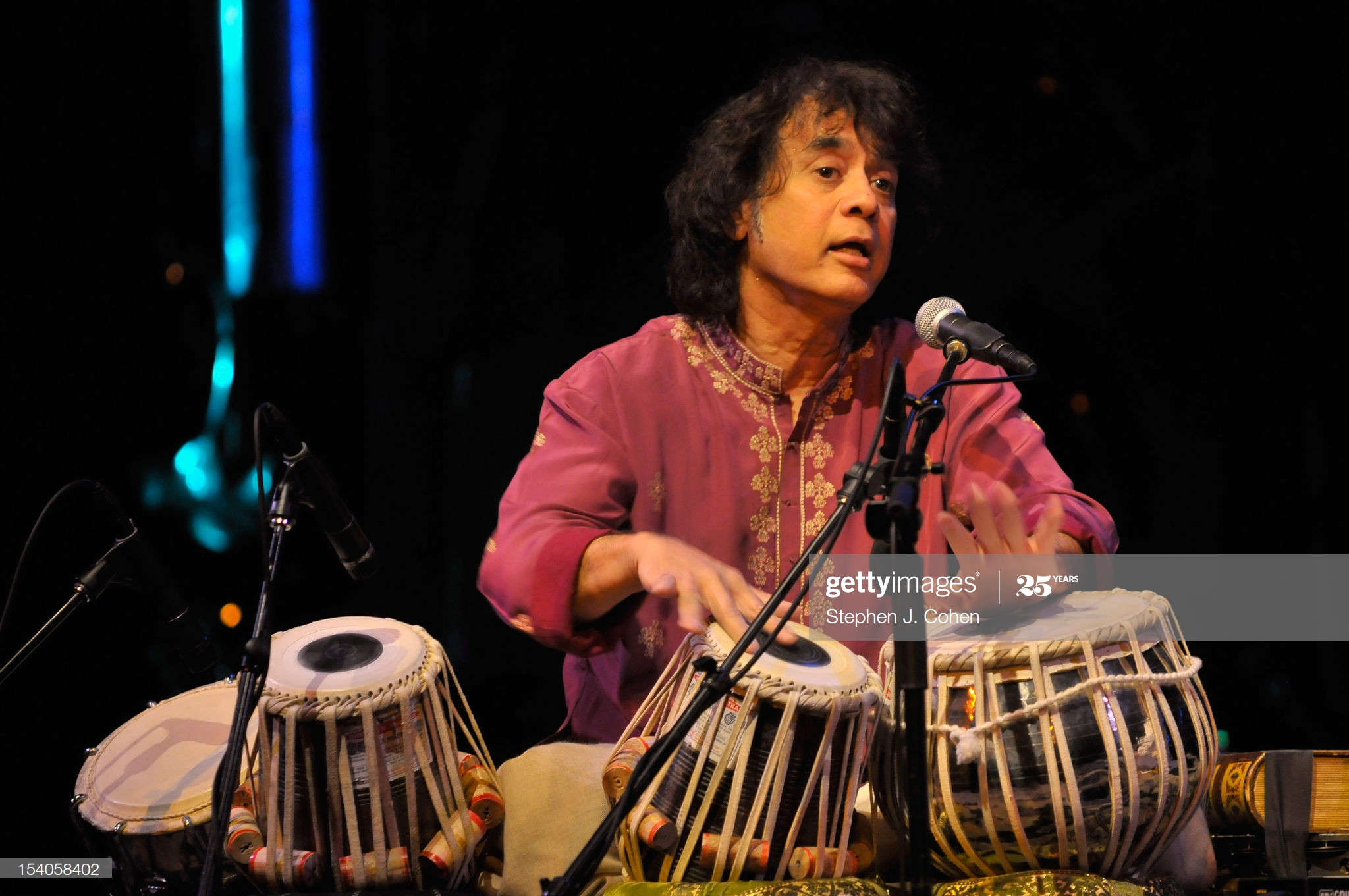 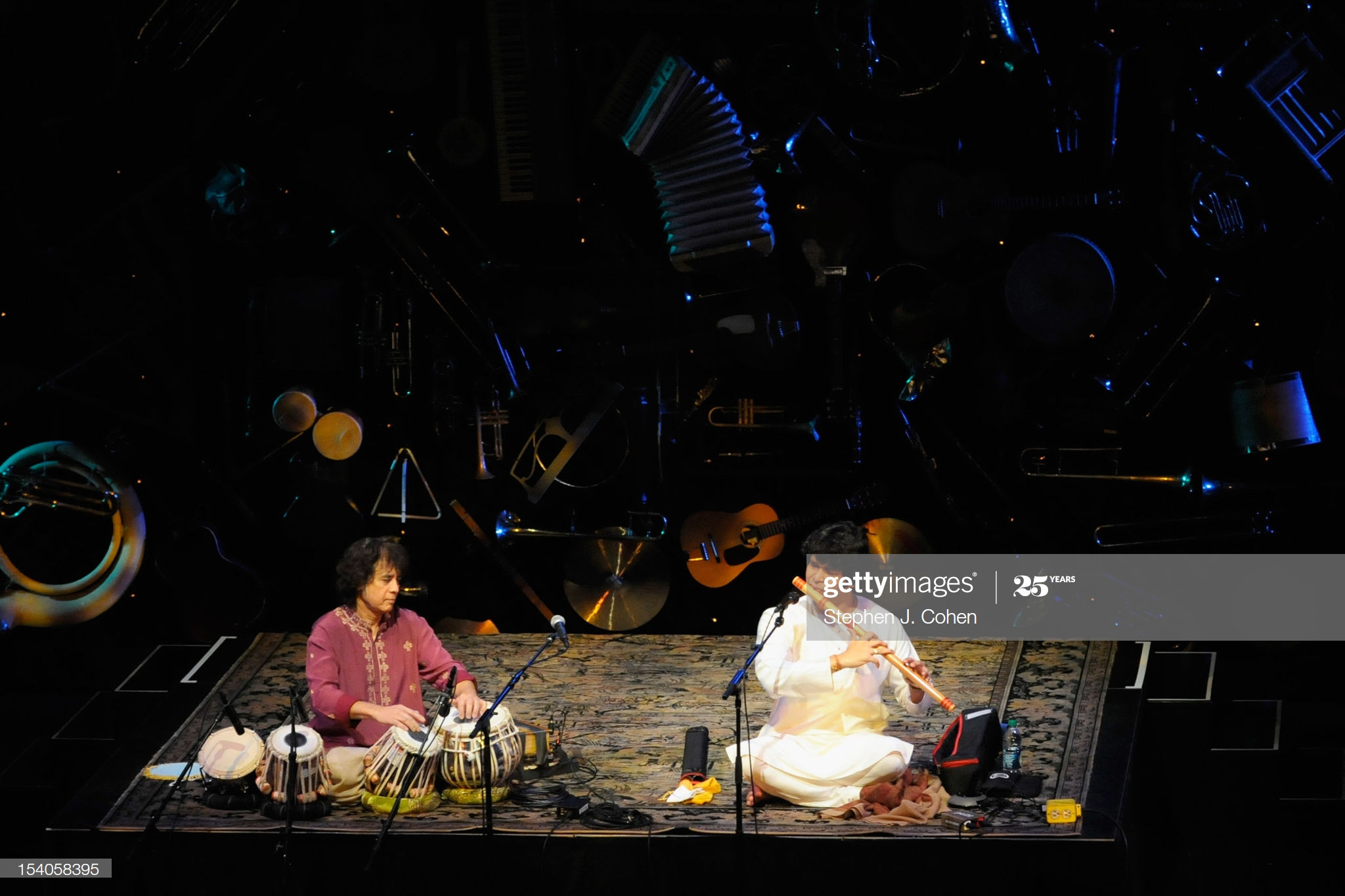 4) From the events of the concert of Zakir Hussain and Kumar performs in Bomhard Theatre on October 7 , 2016 , Louisville ,Kentucky . 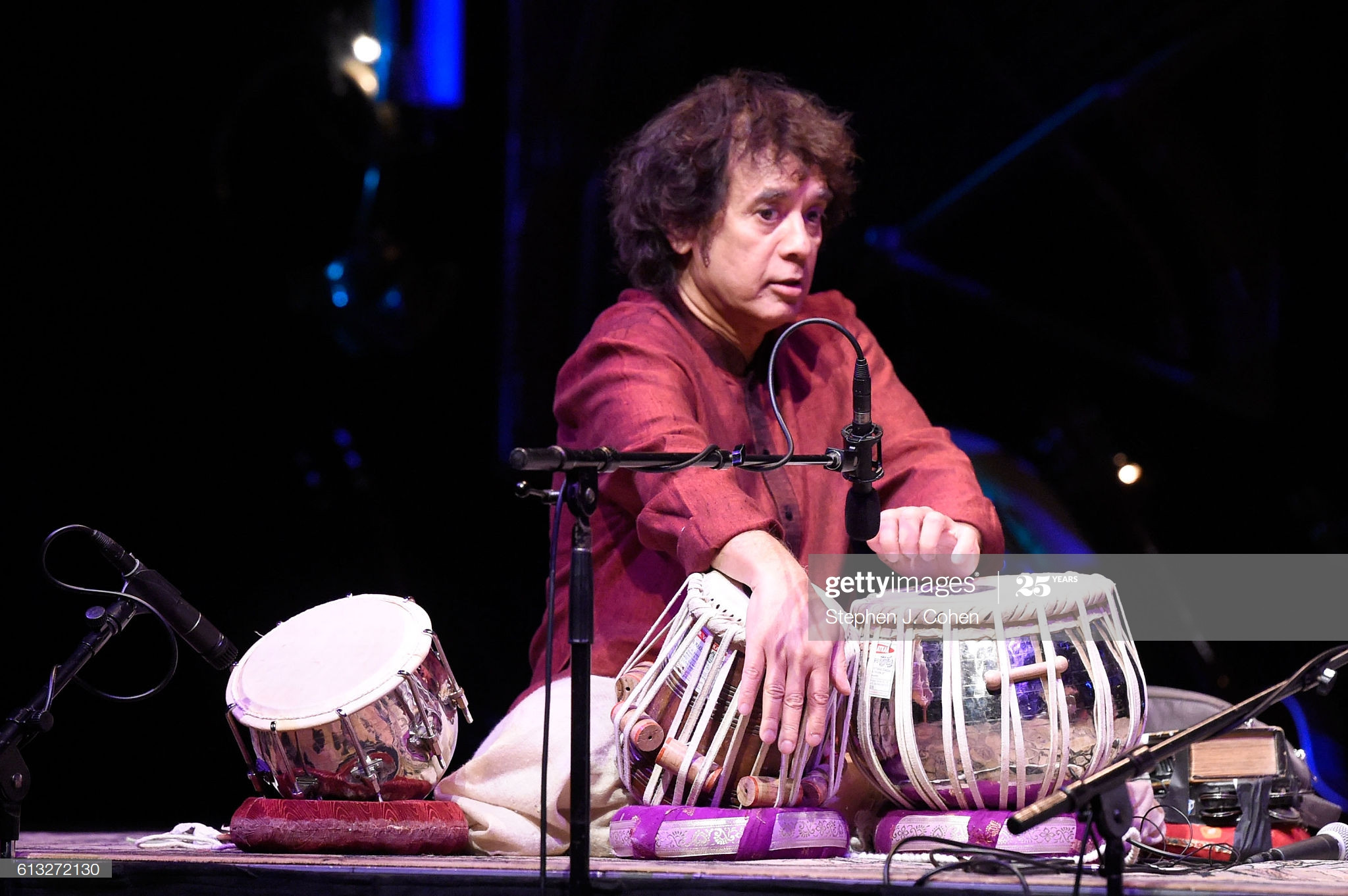 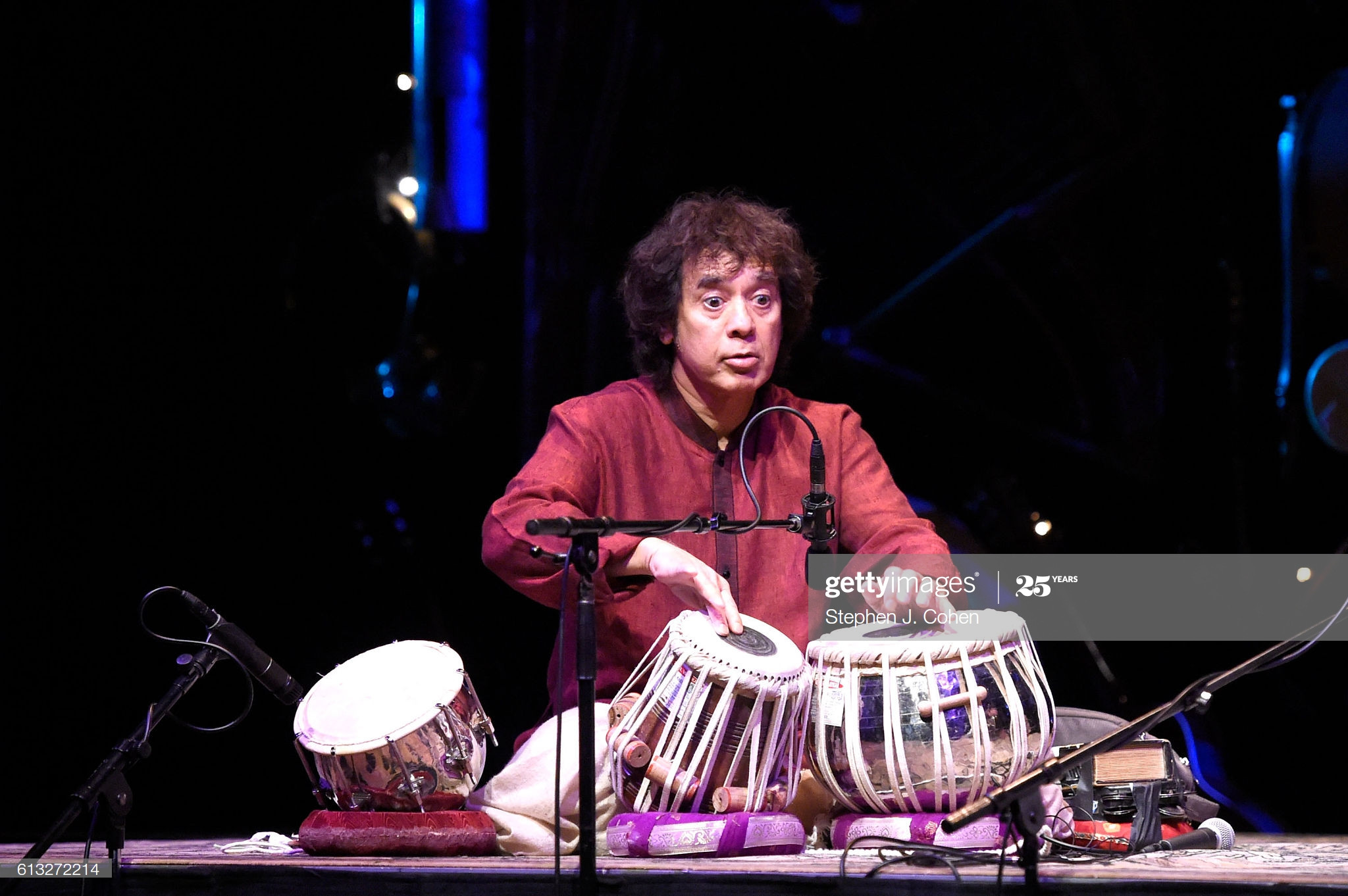 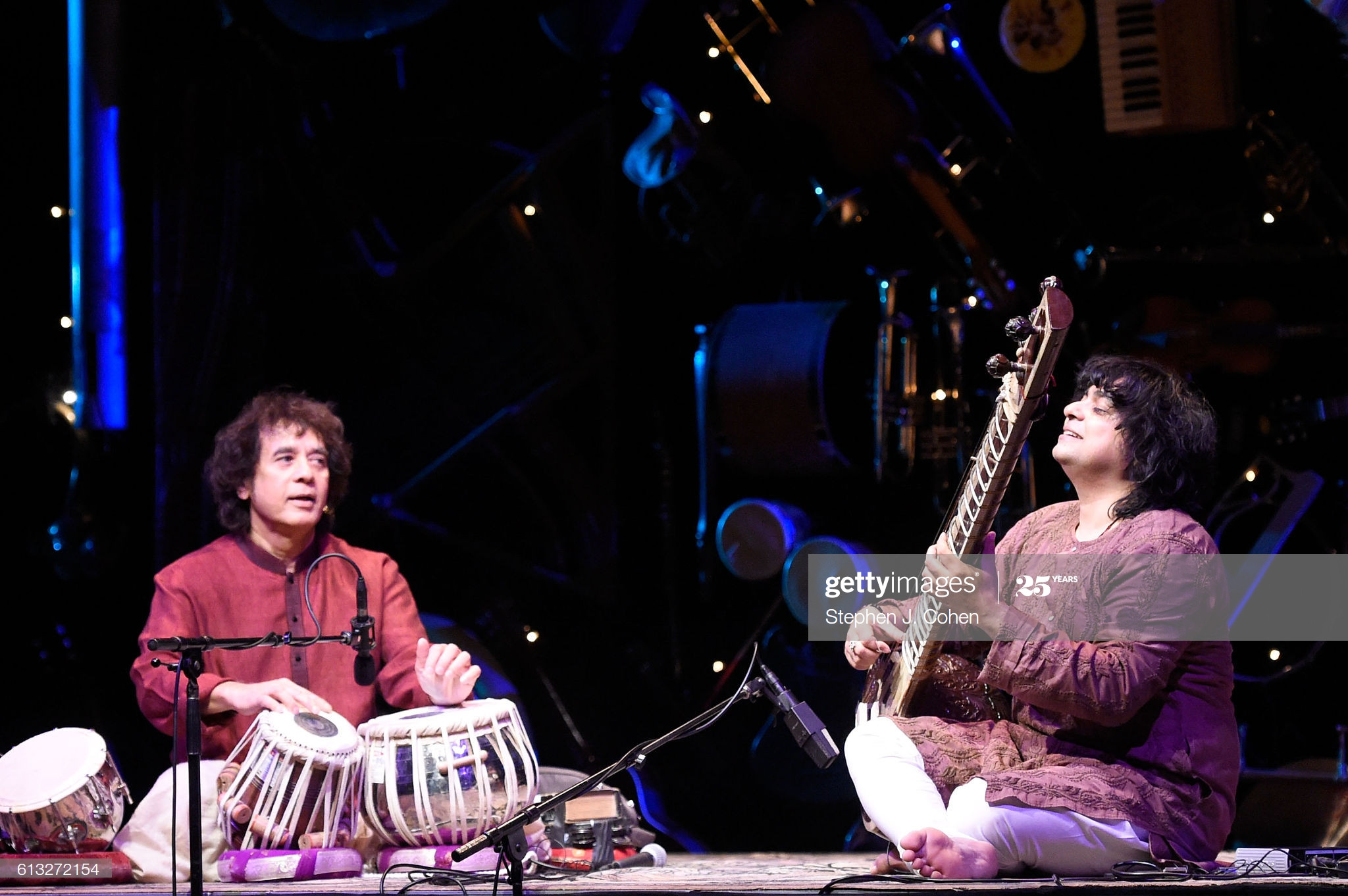 In all those pictures , viewer can see how the book is arranged for the performance.