Stack Overflow for Teams is moving to its own domain! When the migration is complete, you will access your Teams at stackoverflowteams.com, and they will no longer appear in the left sidebar on stackoverflow.com.

Check your email for updates.

Pictures from the recording of Pink Floyd's On the run

I remember a radio interview with some members of Pink Floyd concerning the making of The Dark Side of the Moon and in particular some comments around the track On the Run.

Anyone who knows this song will remember that it's very 'looped' and 'sampled' but, of course it was recorded before the advent of computers and (useful) synthesisers.

In the interview they discussed using 'miles' of tape loops that were ranged across the studio floor during the recording to get the effects that they wanted.

The quesiton is, are there any photos of this anywhere ? I'd love to see how it used to be done.

It's not sampled or looped. "On the Run" was created entirely using a VCS-3. No crazy tape tricks beyond a few overdubs.

Thought I might expand on that a bit.
The Floyd were indeed pioneers in the control room, but not quite at the technical level that is generally assumed. Check out this article for some pictures of some early electronic music pioneers and the processes you're describing. These practices were already well established by the time the Pink Floyd came about.

As far as miles of tape loops ranged across the studio floor, the terminology probably creates a bit of confusion. I think they meant the total amount of tape used for all the loops. Since we're probably talking about 15 inches of tape per second, those loops can get pretty large. For example the loop of sound effects at the beginning of "Money" is about 4 seconds, which makes it about 5 feet long. Considering all the loops present in the entire album, that's an awful lot of tape.

As far as the tape being ranged across the studio floor: 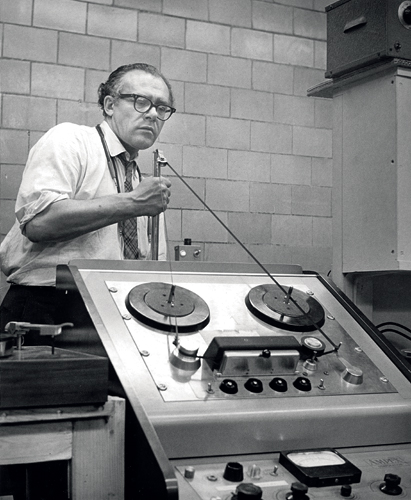 That's how loops were done back in the day. Tape was very expensive, it's not something you'd want literally touching the floor.

5
Is there a recording of just the orchestra for Beethoven's 5th piano concerto?
11
Who are those famous looking people in the video of Pink Floyd's brain damage?
4
Have any of the Pink Floyd's instrumental pieces been vocalized?
4
Why is Pink Floyd sometimes called "The" Pink Floyd?
13
Why does Pink Floyd's "Wish You Were Here" album cover show someone spontaneously combusting?
4
Does Pink Floyd really start a supremacist/hate rally in The Wall?
2
Strange Pink Floyd's "The Wall" album with round sticker
4
Longest song recording that hit the charts
2
What is the recording location, studio, and year of the song "That's What Friends Are For"?