Why does Buckethead's bucket say 'Funeral'?

Buckethead is known for wearing a KFC bucket as a hat: 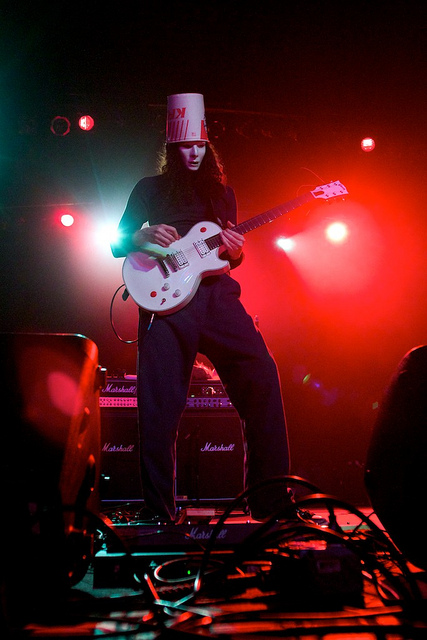 Recently he stuck a 'Funeral' sticker to the bucket: 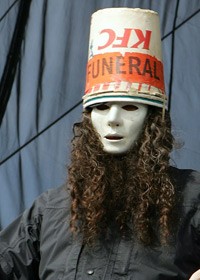 Has he ever given any explanation to the word 'Funeral' ? Why does he have it on his bucket-hat?

It's important to remember that Buckethead is a persona. The closest to an "official" biography I could find for Buckethead says:

First of all you gotta understand Buckethead grew up real lonely on that farm.

He figured no one understood him. The only thing they understood about him was how to treat him bad. To this very day, believe it or not, Buckethead does not like to be shocked with a cattle prod.

It wasn't all bad, though, on the farm. As soon as he moved into the chicken coop he started to make new friends. The chickens took real good care of him, and they liked him so much they scratched his face off. Now he could wear a mask every day, just like Halloween!

So, part of his story is that he was raised by chickens. But, how he got the bucket is also important:

One night, after he got to be this tall, somebody threw a bucket of fried chicken into the coop. Try as he might, Buckethead couldn't put the chicken back together again. So he put the bucket on his head, picked up his guitar and ran to the cemetery.

Whatever happened that night, the bucket stayed on his head, and in the morning it was filled full of chicken bones.

The funeral sticker is part of his protest against KFC for killing his family.

Well what I think the reason is his persona is a person that thinks he's a chicken and cares for them like family,and the other reason is that KFC kills thousands of chickens and he says it's a 'funeral' to them, hope this helps :D

Well I don't have an explanation for the FUNERAL sticker other than what has already been posted on this thread - i.e. just part of the Buckethead persona and the common themes of chickens, slunks, robots and monsters on his albums and website (Bucketheadland.com). This explanation for persona, bucket and mask appeared in an interview published in Guitar Player Magazine:

The Buckethead persona came to be when Carroll saw the 1988 horror movie Halloween 4 and was inspired by the film. He went right out after seeing it and bought a Michael Myers-like white mask. The bucket idea came later that night while eating Kentucky Fried Chicken: I was eating it, and I put the mask on and then the bucket on my head. I went to the mirror. I just said, 'Buckethead. That's Buckethead right there.' It was just one of those things. After that, I wanted to be that thing all the time. — Buckethead, 1996 Guitar Player Magazine

Kind of an odd chicken that Buckethead but man can he shred!

Buckethead may wear this sticker due to the punk band known as "Dead Kennedys". In the music video entitled Holiday in Cambodia, the bassist can be seen with a funeral sticker slapped straight onto his bass guitar just like Big B's.