Buckethead is known for wearing a white mask and a KFC bucket on his head. Is that an actual KFC bucket, or is it a "replica" made from a more robust material?

Surprisingly, it seems like Buckethead does wear a real KFC bucket. Based on photo evidence, he's able to manage to keep a bucket for years. By looking through a timeline of live events, you see the kind of wear that would be expected of a standard cardboard bucket (even if that wear is slower than anticipated).

Let's start with this picture of Buckethead playing live with Primus during Ozzfest in 1999. You can see the rolled up bottom of the bucket has been crimped in places. Exactly like you would expect from a standard cardboard bucket. 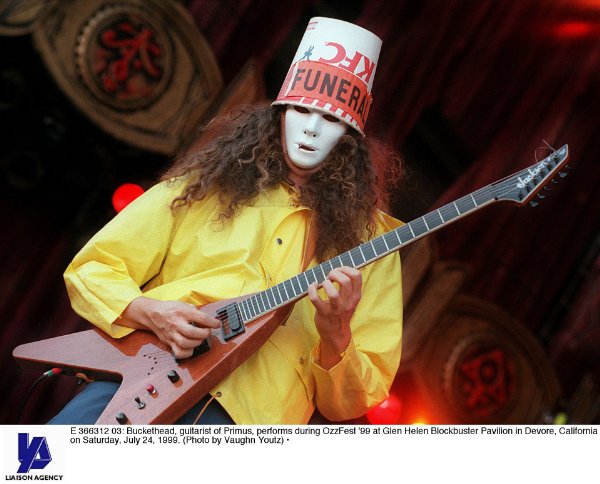 Moving forward to his appearance at the VMAs in 2002, it is definitely a different bucket. The FUNERAL sticker is lower and not as straight. Again, though, you can see where the rolled cardboard has taken a beating, and is falling apart in places. The same goes for the top of the bucket. You can see dents there, as well. 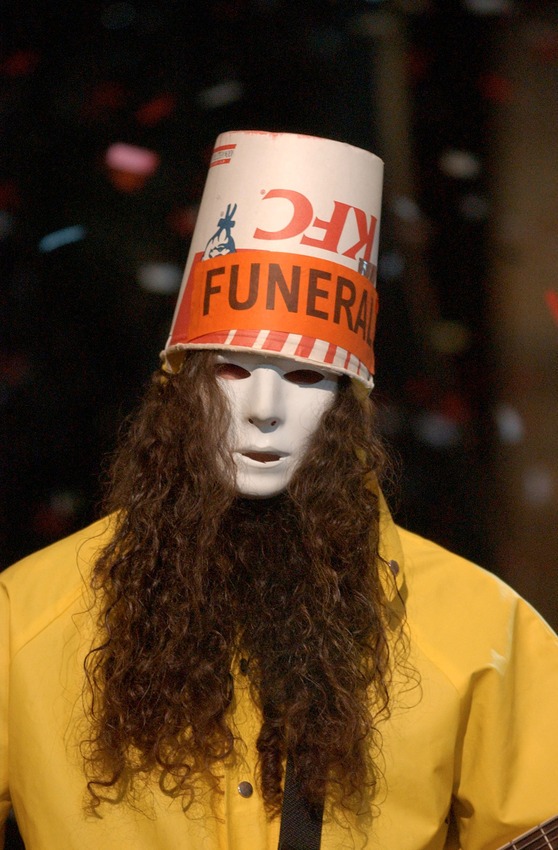 the one he is currently wearing is most likely some sort of replica or modified in some way to make it more durable.

Yes, it's been modified for durability. By adding a second bucket. Images from 2004, playing with Giant Robot, show that Buckethead is still wearing the same bucket from the VMAs, now reinforced with a second bucket underneath. You can also see more damage to the bottom roll. 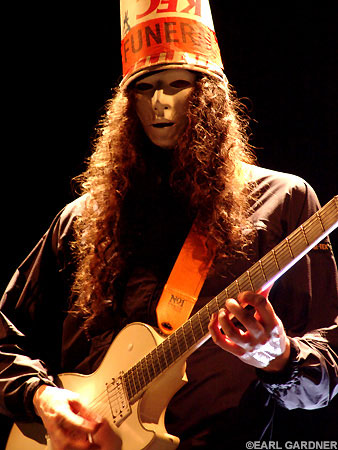 From this top-down angle, you can see the base of the bucket has really seen some damage. Also, note the seam down the side of the bucket. That seems like an unnecessarily small detail to replicate in a faux-bucket. 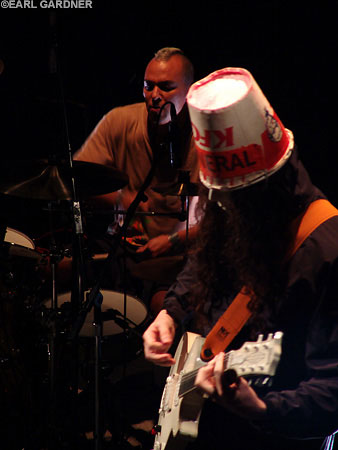 He wears the same bucket right up through 2006 at the Vegoose Music Festival where he performed with Praxis. At this point, the bottom roll is almost completely unraveled, the front is taped up, the top is mostly dented in, and it takes two buckets to act as reinforcement. 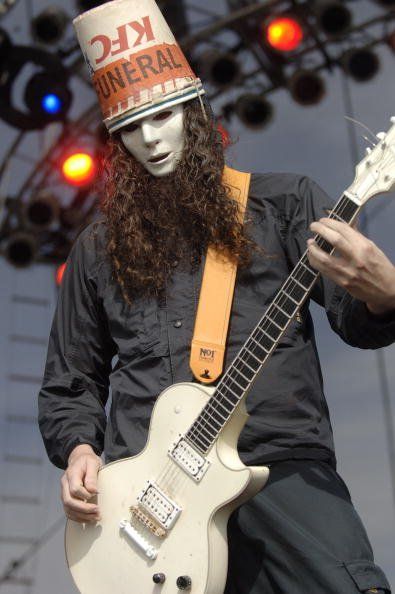 It's at this point that Buckethead switches for a short time to the plain bucket (for unknown reasons). I can't even speculate on what material it is made of, but based on the extra ridges on the bottom, it doesn't look like it's a painted KFC bucket. 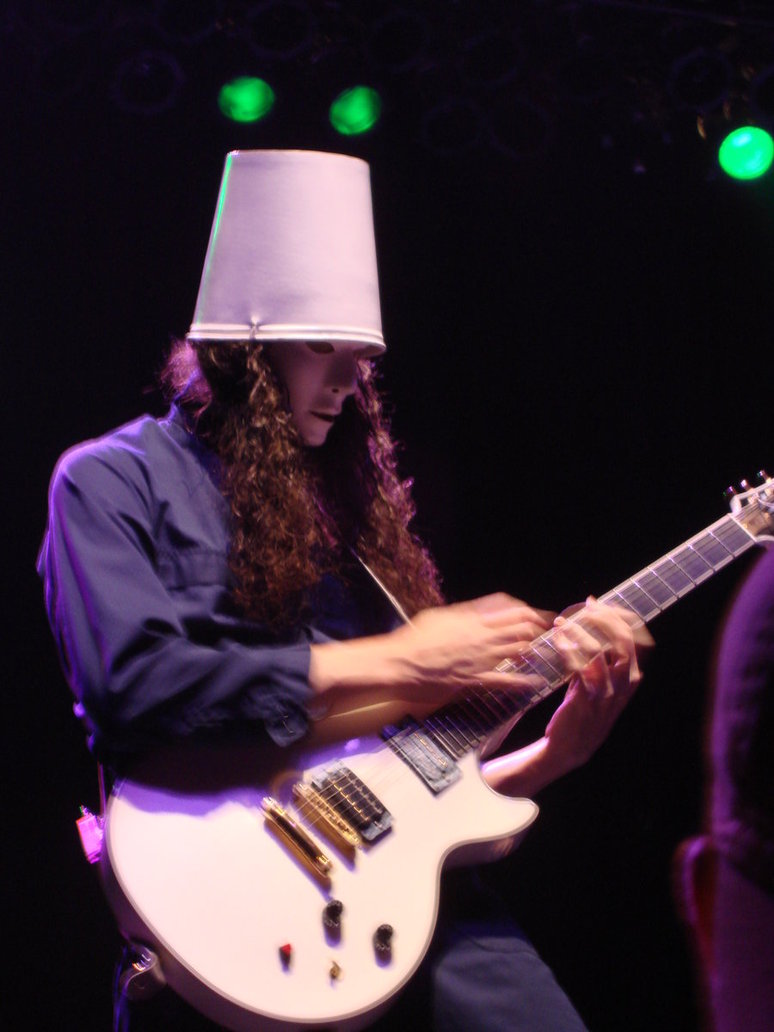 Then, in 2012, he is back to the KFC bucket. You can see the seam running down the right side and the small ridge at the bottom. This matches the original KFC bucket seen from 2002-2006. So, it seems Buckethead has just bought a new one from KFC, and will tour with it as he did the old one. 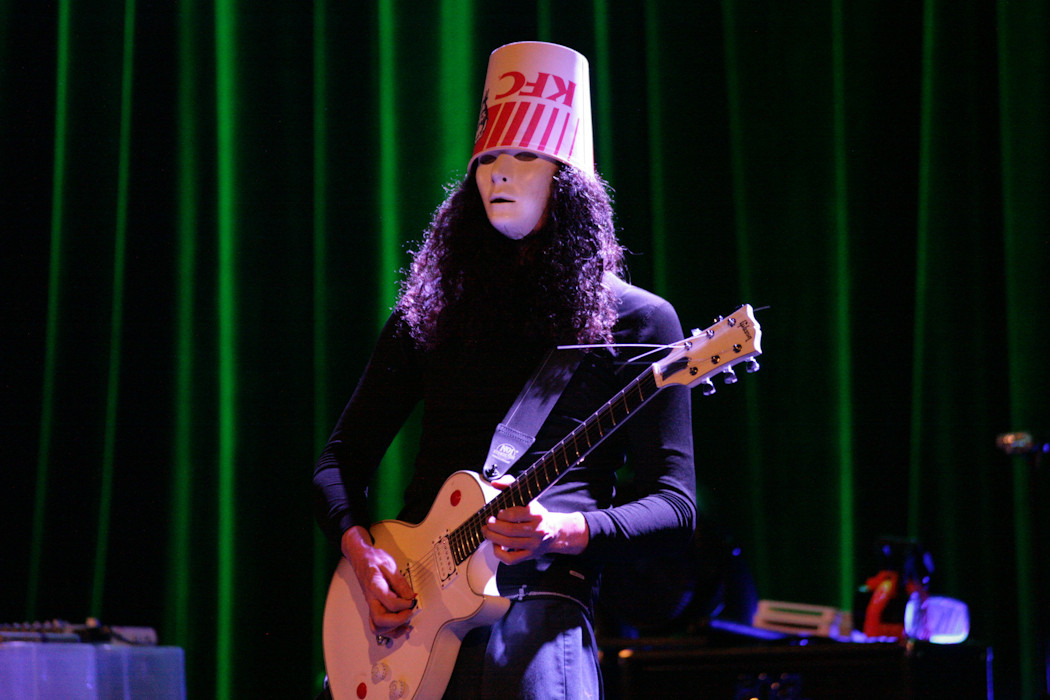 16
Why does Buckethead's bucket say 'Funeral'?