What is the quality threshold for recordings sounding better/truer?

I have a couple of "audiophile" friends who either obsess of vinyl or lossless FLAC files and invest a lot of money into special headphones and audio systems, and swear by the massive difference it makes when listening. There's an obvious difference between cheap earbuds and quality speakers, but when it comes to recording quality I've seen it claimed that, for MP3, after about 192 kbps no one can tell the difference in quality.

That experiment is a little informal. Have there been proper studies to determine how much detail humans can distinguish in audio and, more specifically, what is the quality threshold at which people can no longer distinguish two recordings of the same music? As Franck Dernoncourt pointed out, the bitrate correlates with different quality levels given different file formats and conversion methods, but I'd be happy with any info using a clearly defined format or quality metric.

Unfortunately there seem to have been a large number of informal experiments, with various shortcomings such as using a limited range of source material, focusing on preference without also looking at ability to tell a difference, or making the files listened to available to test subjects (removing some or all of the 'blind' quality from the test) - but relatively few published 'scientific' studies.

Most lossy compression algorithms I know of are based on perceptual coding - a nicely detailed paper describing some of the principles (in the context of the development of PASC, an early technique) is at http://www.minidisc.org/MaskingPaper.html.

A few points from that paper :

Thinking about all those in combination, it's clear that the characteristics of the audio we're encoding are going to have a huge influence on the amount of data we can throw away and still keep the result subjectively indistinguishable from the original (or at least, not subjectively worse). So, even taking account file format and compression algorithm, another huge variable is the song we're encoding.

This means that as a general rule, taking a rough average of the results from the 'unscientific' tests we've read about may give as good an answer to your question as we can hope for without considering a particular song.

For what it's worth, my personal impressions, for music, on average:

On yet another personal note : I listen to music through playlists, so I'm not usually aware what file format or bitrate I'm listening to. Sometimes I catch a bit of a song and I think "wow, that sounds good!" and I check the file - very often (85% of the time?) it is lossless or 320kbps; just occasionally it's 192. It's never less.

The "best"/"optimal" bitrate threshold depends on the audio coding format, since the bit rate is simply the number of bits that are conveyed or processed per unit of time (typically in second). E.g. if you take a FLAC file, and converted it into a 44.1 kHz 16-bit two-channel WAV file, the latter will have a higher bitrate but will sound the same. It also depends on the loudspeakers as you mentioned, and other factors such as the song itself (e.g. rock vs. EDM).

Here are some examples of frequency analysis using Audacity that show the impact of the bitrate: 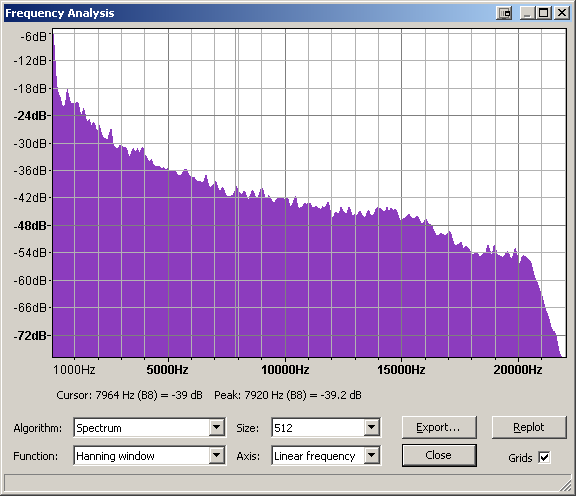 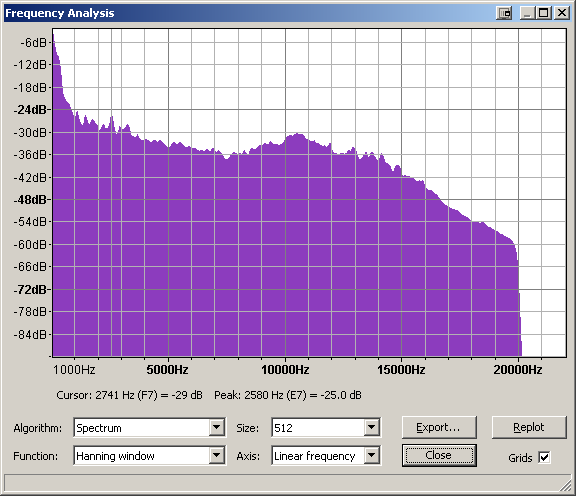 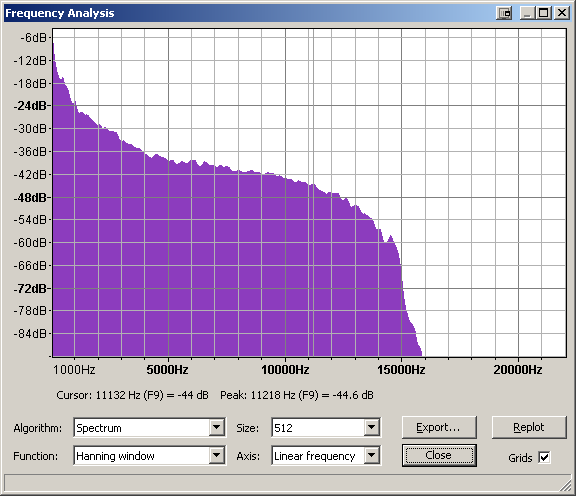 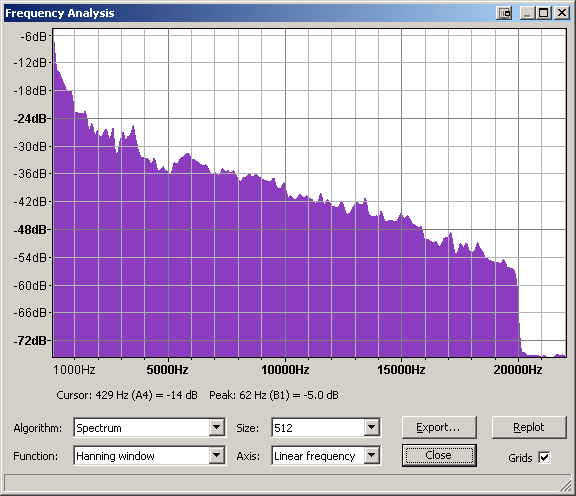 Frequency analysis is just one of many aspects to investigate the sound quality.

From personal experience, discussing with several EDM DJs, for club use the consensus was MP3 320 Kbps or above. If needs be, 192 and 256 Kbps are usable too but stay avoid from them if possible. Don't use anything below.

Some other ideas: When does playing 320 Kbps MP3 instead of FLAC matter?

Not the answer you're looking for? Browse other questions tagged psychology bitrate or ask your own question.

51
Why is the length of a song in much modern music between 3 and 4 minutes?