What makes a rock song "head banging"? When is a rock called head banging?

Humans have a natural tendency to bob their heads to a beat. This occurs in many types of music, but "headbanging" is when this is taken to a much more intense level. The performer or listener throws his or her whole body into moving to a hard rock song, shaking their head violently forward and backward to the heavy beat, often making their long hair fly back and forth.

This move first became named and popular among listeners in the early 1980's in the hardcore punk scene, about the same time that the similar activity of "moshing" in a "mosh pit" took off, but there are documented cases of listeners headbanging at Led Zeppelin shows as early as 1969, and of the performers Ozzy Osbourne and Geezer Butler doing it by 1970. It grew more common in the late 1980's and early 1990's at heavy metal and grunge concerts, and the term was further popularized with the 1987 launch of the nighttime MTV show Headbangers Ball.

Headbanging on the album cover of Nirvana's 1989 debut, Bleach 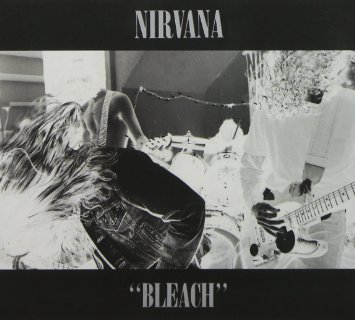 Classic music to headbang to would be 1980's hardcore. Black Flag, The Germs, or Minor Threat would all be good choices. If you prefer heavy metal, Metallia, Slayer, or Pantera all have songs hard and fast enough to headbang to. If you want to try to headbang to something from the 2000's, you could try nu metal bands like Korn, Slipknot, or Linkin Park.

Warning: Headbanging can be dangerous if done with excessive force. Do not hurt yourself just for a quick thrill.

This is a term related with the action when musicians or audience banging their heads in rhythm with the music.

The origin of the term "headbanging" is contested. It is possible that the term "headbanger" was coined during Led Zeppelin's first US tour in 1969. During a show at the Boston Tea Party, audience members in the first row were banging their heads against the stage in rhythm with the music.

A definition describing "headbanging", from the book "Subgenres of the Beast: A Heavy Metal Guide" By Yrjänä Kegan 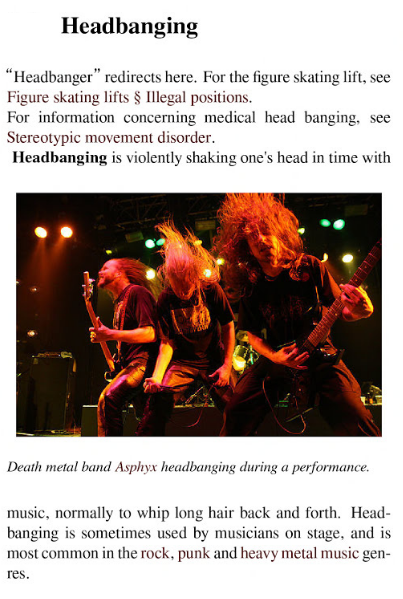 Not the answer you're looking for? Browse other questions tagged rock terminology or ask your own question.

16
Does rock + rap/hip-hop genre have a name?
7
Rock song with lyric “walking in your shoes”, gruff voice singer like Linkin Park
7
Identify female vocal country/rock song when search for lyrics yielded no exact matches - “you say I won't forget you”?
10
A piece of music that is almost identical to another is called?
2
Late 2000's rock song possibly called “On and on”
4
First rock band ever?
1
What version of the song “Rock Me” was popular in the 1960s?
2
Rock subgenre of “Darkness” by SPF1000