Does a genre describe an artist, a song, or both?

I've seen the term genre being used to refer to a specific song and other times to refer to an artist or their album. While typical there isn't much difference, many artists write songs of different styles or their overall style changes over time.

For example, The Rolling Stones have a wide range of songs from Start Me Up to Dead Flowers which sound different and could be perceived as being different genres. Another example is Stone Temple Pilots which have songs from Dead and Bloated to Atlanta to Maver which all are by them, but sound completely different.

It depends how tiny you make each pigeon-hole.

In the 'old days' you were either pop, rock, dance, jazz etc. It didn't really differentiate much finer than that.
The we got heavy rock, then heavy metal… punk got in the way for a while, but behind it disco & soul took their own route. Punk became new wave; then came electronic, which spawned another newspaper headline of new romantic…

..wind on another 30 years & we now so finely differentiate genres [e.g. garage; which sprung from house & has since spawned speed, 2-step, future & rock offspring in the UK alone] that some artists can struggle to stay inside the pigeon-hole their audience have forced them into.

Others fare better by having managed to stay out of a specific pigeon-hole altogether. Those seem to be the most long-lived.

Taking an example - U2 [doesn't matter whether you like them or not].
They have managed to continue to do pretty much the same thing for so long that they've ended up being in a pigeon-hole all of their own. "It sounds like U2" is about as close as you can get to forcing them into one. They're not really rock, though that would describe them in the very broadest terms, but you can't quite squeeze them into any other simple category.

So… is "U2" a genre?
Nope - it's a band, but one with such a distinctive sound that band & genre sit in a pigeon-hole with only one act in it.

Is "The Rolling Stones" a genre?
No, by the same token as above, they have been lucky to escape being pigeon-holed so tightly. The same could be said of many long-lived artists, including The Beatles, David Bowie, Queen; even Oasis managed to out-live their early Brit Pop tag.

Is "speed garage" a genre?
Yes - but one so tiny that the pigeon-hole is crowded, with acts falling out of it all the time & new ones taking up the space they previously occupied.
Each time enough acts fall out of that hole, someone will think up a new name for the direction they took, once more locking them into a new, tiny, genre.

You can take one song in isolation and label it as being of a particular genre, but as shown with the examples in the question, some artists do not always make songs of the same genre and change genre over time.

For example, The Stones are generally considered to be a rock band, but Dead Flowers is not a rock song.

The vast majority of genre labels can describe either, but with some the 'focus' is more on the song, with others, it's more on the artist.

I mentioned in an answer to Is there any *objective* genre-like categorization of musical works? that genre labels describe different dimensions of musicology. Some are descriptions of the techniques used (Dub); some have cultural references (Christian music); Some relate to what you're expected to do when you're listening to music is listened to (Dance).

Any artist could make a "Reggae" track, because reggae is strongly associated with characteristic bassline phrasing, skanking guitars, organ bubbles and so on in a way that their presence makes a track a reggae track. Equally, (although Wikipedia disagrees with me) Many Rivers to cross by Jimmy Cliff is not really a reggae track - it's stylistically more of a gospel track IMO.

If someone writes a rock song about Jesus and ways in which he is cool, it still wouldn't be seen as "Christian Rock" if the artist's previous marketing efforts weren't specific to that audience sector. Conversely, an established Christian artist's song about, say, plastics extrusion, could still be seen as a Christian rock track, due to the association with the artist.

If I write a pop song with Korean lyrics, is it a K-Pop song? I don't think so, as I'm not associated with an actual Korean production house - unless I had particulary tried to parody the style.

I think these are mainly exeptions though, and that most genre labels could apply to either.

For example, if you try to tag your music collection, it's up to you if you tag each single song with an individual genre. Or the whole album with either a generalised genre ("Rock") or a list of single genres.

Bowie's "Low" for example: it's a mix of genres, some songs are "rock", some are pure "ambient" tracks. You could name the whole album as "art rock" or something similar or you can give every single track a single gerne.

As being difficult with albums like this one, it is getting even harder with collection of albums (="artist" in your question). Take Ulver for example: 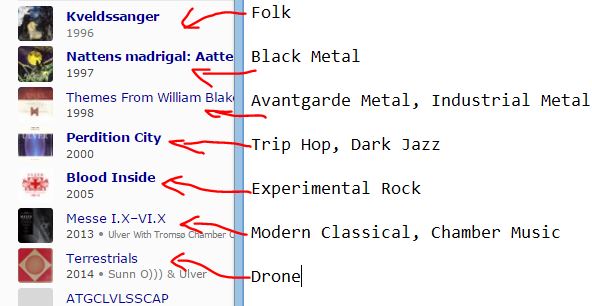 The term "genre" works best when it comes to single songs/tracks/pieces. On collections it can work but gets harder when the artist is too open minded ;-)

Genre describes the song. It may be ambiguous what genre a song belongs in, but genre is an attribute of songs (or other works of art, all art has genres).

Artists are associated with a genre. In theory, an artist can create songs of any genre, but in practice, audiences tend to look to certain people for certain types of songs. Few if any artists are consistently successful (at reaching an audience) in multiple genres. A lot of it comes down to marketing --songs by a given artist, of a given type, are targeted to a specific audience known to be receptive to that artist doing that music.

When an artist "changes genres" it really means they are being marketed to a different audience. Taylor Swift's songs were arguably always as much pop as they were country, but at some point, the decision was made that she would henceforward target a pop audience not a country audience.

12
Is there any *objective* genre-like categorization of musical works?

39
How to determine the genre of a song?
10
Definition of the cyberpunk genre?
8
What genre of music does G3: Vai, Satrianni, Malmsteen represent, what is the name for their guitar tone?
1
What genre is Preserved Valkyria
2
In what music genre is The Coconut Song?
1
Recognising genre and sub-genre
4
Is there a genre that mixes punk rock and jazz/marching band that isn't ska?
1
Whats this musics genre?
3
Genre which is purely rhythmic
3
Do genres have anything to do with what we like?