I’m a university student taking a creative writing module, and I am currently conducting research for a story that I intend to write about a musician. I’ve spent the past few weeks trying to find the name of an appropriate make and model of guitar to fit his economic background/character, but I have not had any luck, and I was hoping that someone here would be kind enough to advise me.

The guitar would need to have been available circa 1995/6 ish in the UK, and it would need to be ‘affordable’ -- something that a lower-middle-class family might buy their teenage son for Christmas (I’m thinking less than £100/$150). It does not have to be something that a ‘serious’ musician would choose (i.e. it can be a bit of a rubbish one: in fact, the more rubbish the better). Also, if possible, it would be great if someone could recommend me a guitar by a brand that would be recognizable to a musical ‘layman’ that fits all these criteria, but I am open to any suggestions.

Ideally the guitar would be an electric one.

https://issuu.com/retromash has Argos catalogues for that period.

if you go to virtual 'page' 404 of the 1995 superstore catalogue, http://issuu.com/retromash/docs/argossuperstore-1995-springsummer (actually page 586 of the magazine), you can see guitars. We have an Encore strat style electric guitar for £109... A Hohner "Sunburst" electric lead guitar for £159.99... and even an Encore 6-string electric lead guitar in your price range : £89.99! Including the all-important flyspeck headphone amp! 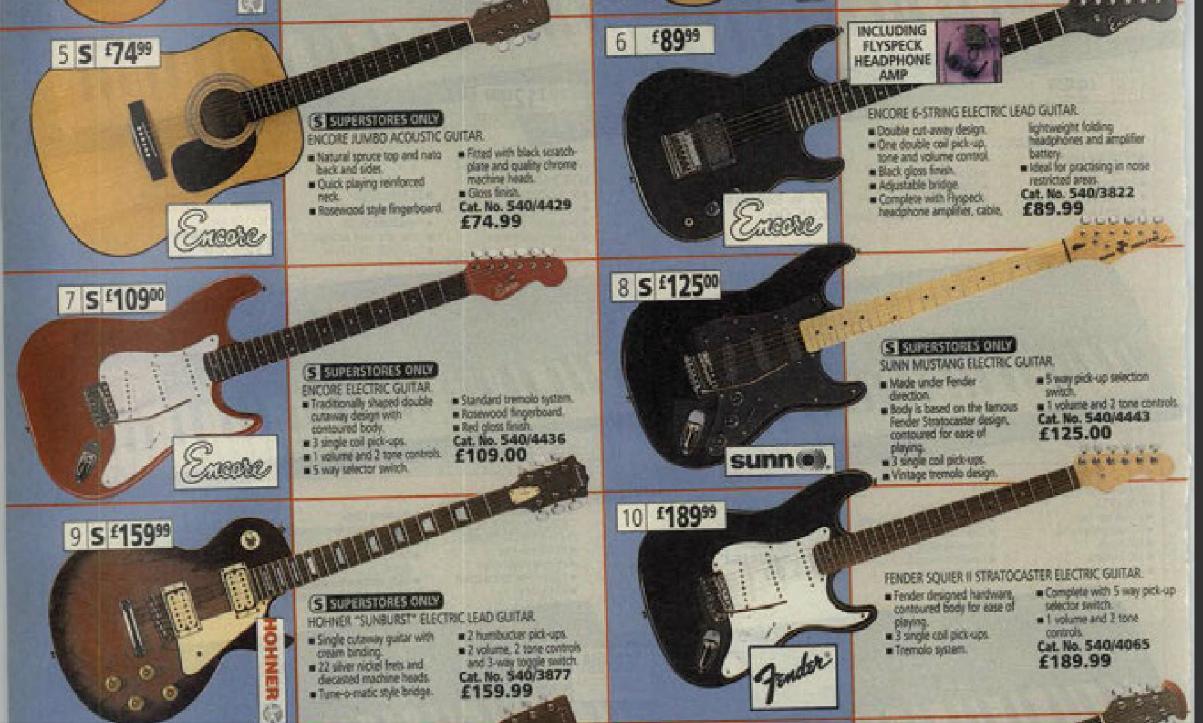 The best way to answer your question, if you are in the UK, would be to go to a well-established guitar store yourself, find a manager or owner who has been in the business for the past 25 years, and ask them what guitar they would sell to such a family to give as a Christmas gift in 1995. Make sure to explain that this would be a first guitar for a teenage boy.

What kind of guitar? Electric, acoustic, classical? What kind of music does your character play? This will determine the answer.

I think it would be better to choose a guitar marketed by a British brand (and built in Asia) or another brand within the Commonwealth or the European Union. The prices would be lower.

British designer and builder Trevor Wilkinson has created a number of lines of electric guitars.

Wilkinson brands include Encore, Vintage, Italia, and Fret-King. I do not know what models were for sale in the 1990s; you will have to look that up.

Current Wilkinson models, including all the brands I've mentioned, can be found at the John Hornby Skewes & Co., Ltd. website.

You would also not go wrong with a Yamaha guitar -- they are a Japanese brand but they are the world's largest brand of beginner, low-budget guitars and they have a large sales presence in the UK.

11
What song has been sampled the most (ended up in the most other released tracks)?
8
How has deafness been incorporated in music history (present included)?
18
Has any instrumental music ever been used to carry information?
3
Which school is the one that Claude Debussy studied in?
7
What's the oldest known song that is still played today?
1
Did Glenn Gould's humming bother other musicians during concerts?
1
Why is the melody for the “Gloria” from “Angels We Have Heard On High” so similar to the one from “Ding Dong Merrily On High”?
7
Ginger Baker dead: Why is he been called the most dangerous drummer?