Age of performed musics throughout history?

As far as I know, in other periods they only performed the contemporary music of that time. For example, during Baroque period they only performed Baroque music, and when they reached Classical period they stopped performing Baroque music (and that caused the loss of many Baroque scores). This changed at some time, probably it was a gradual change.

I would like to know more about that change in what music was performed. More precisely I would like a function that takes a given year and returns the year or period of oldest music regularly performed at that year.

This information can be had in statistical fashion -- ie., at a given date, X% of pieces on programs of this type (orchestra, salon, etc.) were by living composers and X% by dead composers -- from the work of William Weber. See The Great Transformation of Musical Taste.

I assume you are not talking about church music, either, since Gregorian chant (ca. 900) has been performed every day since the Middle Ages and continues to this day.

Leaving out church music, we'd have to start around 1600, when secular music really begins to have its own history; here's a rough guesstimate of what your function would return, based on my study of music history over the years:

UPDATE: The following is a graph of the maximum age of performed music, throughout the times, according to Robert's data: 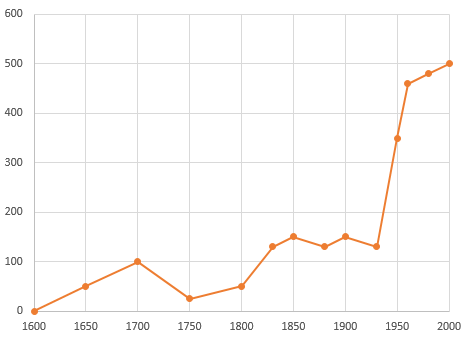 18
What is the largest concert performed?
8
How has deafness been incorporated in music history (present included)?
6
Amateur's History of Rock and Roll
9
Longest-running artist in music history?
3
History of the Guitar in Rock 'n' Roll music
2
Podcast on History and evolution of Musics
3
What are the 'Non-European' 'Classical' musics?