What is the exact meaning of the song “Hotel California” & its album cover image?

There one song Hotel California from Eagles , I tried to know about meaning of that song & its album cover image which has something pointing to some ghost on window.

From google i read its poiting to Antony LaVey who was converting people to his church of satanism (lyrics matched with is : you can never leave, from which they could "never leave" etc.).

But here in this question if we consider the colitas meaning than things will going in different direction.

so is this song is something related to satanism or drug ? 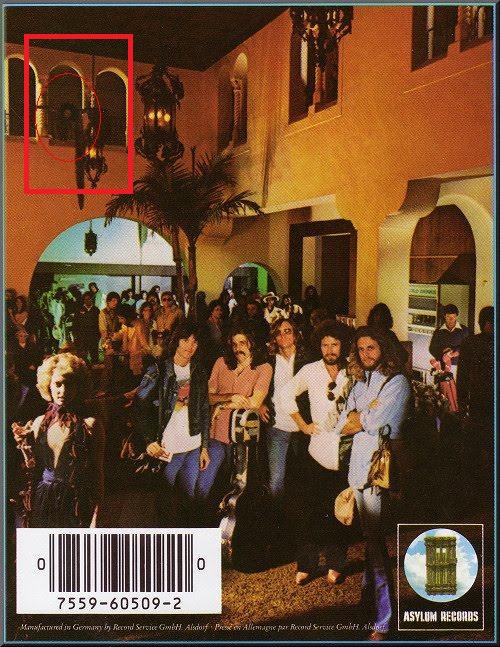 Like a lot of great songs, which stick in people's heads, it was written to suggest a lot of things, rather than have a specific meaning.

The public statements by various band members about the song refer to the song being about the loss of innocence, and you can pretty much hang everything on that peg : personally for The Eagles themselves coming to California, knowing first-hand the excesses of the rock'n'roll life and other weirdness - more generally, a comment on American society turning away from a more hopeful, idealistic time into a time of self-centeredness and excess. Also the nightmare feeling of an innocent person, who's arrived in this weird hotel full of decadence and odd goings-on, from which there seems no escape. Also the satanism and drugs references. Also the fact that you can turn almost anything in the song (colitas etc) into a reference to something else, that's also part of the nightmare feeling, that nothing is what it seems.

What does "Hotel California" really mean? (And other questions for Don Henley)

“Well, I always say, it’s a journey from innocence to experience. It’s not really about California; it’s about America,” Henley said. “It’s about the dark underbelly of the American dream. It’s about excess, it’s about narcissism. It’s about the music business. It’s about a lot of different…. It can have a million interpretations.”

"... It is ostensibly about a luxury hotel visit that crosses over to the dark side - but it is really an allegory about the hedonistic lifestyle the musicians enjoyed in the 1970s.

Or at least, that's the most popular interpretation. The song was also rumoured to be about heroin addiction, cannibalism or devil worship (the album cover allegedly shows Anton LaVey, leader of the Church of Satan). ... "Everybody wants to know what that song was about, and we don't know," Frey said in a BBC interview eight years ago.

A decade earlier, he was more forthcoming, telling NBC's Bob Costas that he and Henley "wanted to write a song that was sort of like an episode of the Twilight Zone".

"All of our songs were cinematic, but we wanted to open up with [a montage]," he said.

"It was just one shot to the next - a picture of a guy on the highway, a picture of the hotel, the guy walks in, the door opens, strange people.

"We take this guy and make him like a character in The Magus, where every time he walks through a door, there's a new version of reality.

"We decided to create something strange, just to see if we could do it. And then a lot was read into it - a lot more than probably exists.

"I think we achieved perfect ambiguity."

When a US spy plane made an emergency landing in China in 2001, the crew members were asked to recite the lyrics to prove their nationality. Apparently, their Chinese captors considered that "the song symbolised America".

Henley would have disagreed. "We were all middle-class kids from the Midwest," he told Rolling Stone. "Hotel California was our interpretation of the high life in Los Angeles." In 1995, he referred to the record as being about a "loss of innocence".

I always felt that it was referring to “the destination” everyone yearns to be at in their life or the place of your deepest desires and dreams. Like becoming world famous in a rock & roll band or whatever- and when you get finally get there- it is NOT what you expected or even ever really wanted. And there’s no way out once you get there. The saying “be careful what you wish for because you just might get it” sums it up perfectly.

I'm almost certain that it's about heroin addiction.

Verse one is pre-first use. Things are fine, but looking for something exciting which is the light, knowing that it could go wrong. The candle is the flame under the spoon prepping the drug, she showing the way is show him how to do it. The bell is in one's head, aka 'it hit me' or 'it came to me' that this is what I want to do

Verse two: "She" is the heroin, the dancing is the high from it (coping with either remembering or forgetting deep emotions or someone or something), the wine is someone that is doing it for fun or recreation such as they did in the 60s. The voice is the looming addiction

Mirrors and champagne is the good of the high. Prisoners and masters are the growing addiction. "Stab it with their steely knives" is injecting heroin with a hypodermic needle. Running for the door and passage is trying to get out of the addiction. Receive only and never leave is the strength of the addiction and then even when recovering one is never truly free from it.

Not the answer you're looking for? Browse other questions tagged lyrics meaning or ask your own question.

24
In the song “Hotel California” by the Eagles, what are “colitas”?