What are the origins of the 12-bar blues?

The 12-bar blues is one of the most pervasive musical forms in Western music. For those who don't play, the symbols above are the chords played in each of 12 bars. Examples are Sweet Home Chicago, Rock Around the Clock and Stevie Ray Vaughan's Pride and Joy.

Can we identify the first song to use this particular progression? What were its roots and influences?

No, we cannot identify the first 12-bar blues song, because of the nature of the blues itself. It was an oral tradition of freely improvised music. Nobody would have written it down, and even if anybody had, all subsequent performers would modify a song or melody and perform it differently every time.

It was not until the early years of the 1900s that anybody attempted to write down or publish a 12-bar blues. That goes to the work of W. C. Handy (1873 - 1958), known as the "Father of the Blues", and his first work in this area dates to 1902. But in this regard, Handy was merely being a musicologist, writing down and reporting on an oral tradition that had been around for centuries.

The first published piece of music in the 12-bar blues style was "Memphis Blues" in 1912, a composition by W. C. Handy in the style of the folk blues he had studied. (Wikipedia article "The Memphis Blues") 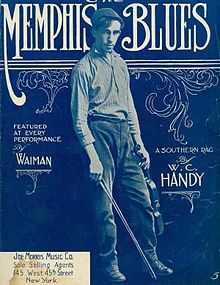 What we now know as the 12-bar blues is generally regarded as first appearing around the end of the 1800s in the region of the United States of America known as the Deep South. (Wikipedia article on Blues). However, the blues wasn't invented at one point in time by one composer. It evolved, and its evolution went on for centuries before academic people took note of it and wrote and published articles describing it. It goes without saying that there were no audio recordings made until circa the 1920s when the technology became available.

This is a difficult topic to discuss, but the history of the 12-bar blues is entirely bound up in the practice of slavery in what is now the United States of America.

The blues comes from the United States of America, entirely from people whom we today call African-Americans: those people who were brought from West Africa to the New World as slaves, and their descendents. Everything about the blues can be traced to West African music.

The first recognized form of the blues is the "field holler": a work song sung by African-American slaves (and after slavery formerly ended, as sharecroppers or other kinds of laborers), as they worked in the fields. Wikipedia cites the first written description of the "field holler" as being published in 1853, so this would be during the time of slavery in the USA. (Slavery formally ended in 1865.) However it is almost certain that the field holler has been sung by slaves in the fields of what is now the USA since the first slaves were brought to work there, and that would be circa 1619.

The field holler is often in a kind of call-and-response structure, and this is where the "12-bar" part comes in. In some field hollers, one person sings a four-bar phrase. Then the other workers alongside him join their voices together and sing the phrase back, like an echo. Then the leader sings the concluding (contrasting and different) four-bar phrase. This is often sung in the rhythm of the manual labor being done, in order to assist the workers in coming together to coordinate their muscles in moving or lifting something, for example.

The metrical structure of the 12-bar blues, is an important distinction: It has a structure of A A B, four bars each, and this appears to be a West African structure. In contrast, Western European folk music, that of the White people in what is now the USA, almost always had a symmetrical 16-bar structure of four groups of four bars, and could be A A B A or some other structure.

Ever since White people enslaved African people, the music of one group began to influence the music of the other. About forty years after slavery formerly ended, American jazz began to develop; jazz would have never existed without African-American musicians and their musical skills instruments and traditions, being exposed to and gaining access to White Western European music and musical instruments, and using these resources to create something completely original and unique to the United States of America. The blues is of a similar vein.

Slavery was horrible, detestable and utterly wrong, but the music of the United States of America as we know it (and many other places in the New World) would not exist without the African slaves and their descendants having applied their musical creativity to the musical resources brought to them by their White slave owners, and all the interactions between the races that happened since slavery formally ended, up until today.

British and Irish folk, dance and line out Psalms singing had a part in American music as well. Elements like blue notes, syncopation and scales like Dorian and Mixolydian were brought to America by working class British. It is the unique qualities and similarities between West Africa and Northern Europe that made it happen. Then there is classical, not in the least Bach. I realize I’m being a bit broad in my statement, and speaking about American music in general, but I’m referring to blues as a part of this.

4
Is the "What's With Andy" song "Kindergarten Blues" based on a real classic blues song?

12
Musical difference between "Chicago blues" and "Detroit blues"
18
Blues and “big-legged women”
12
What does Son House mean when he refers to "jumping" with regard to the blues?
8
What is Jimmy Rushing saying and meaning in Berkeley Campus Blues?
12
Who recorded Rusty Dusty Blues for the first time?
8
What genre is the song "The Blues Done Come Back" by Count Basie Orchestra?
6
Trying to understand the different styles of blues
4
Is the "What's With Andy" song "Kindergarten Blues" based on a real classic blues song?
7
When was blues first called "the Devil's music"?