What do the symbols mean on Led Zeppelins iconic fourth album? 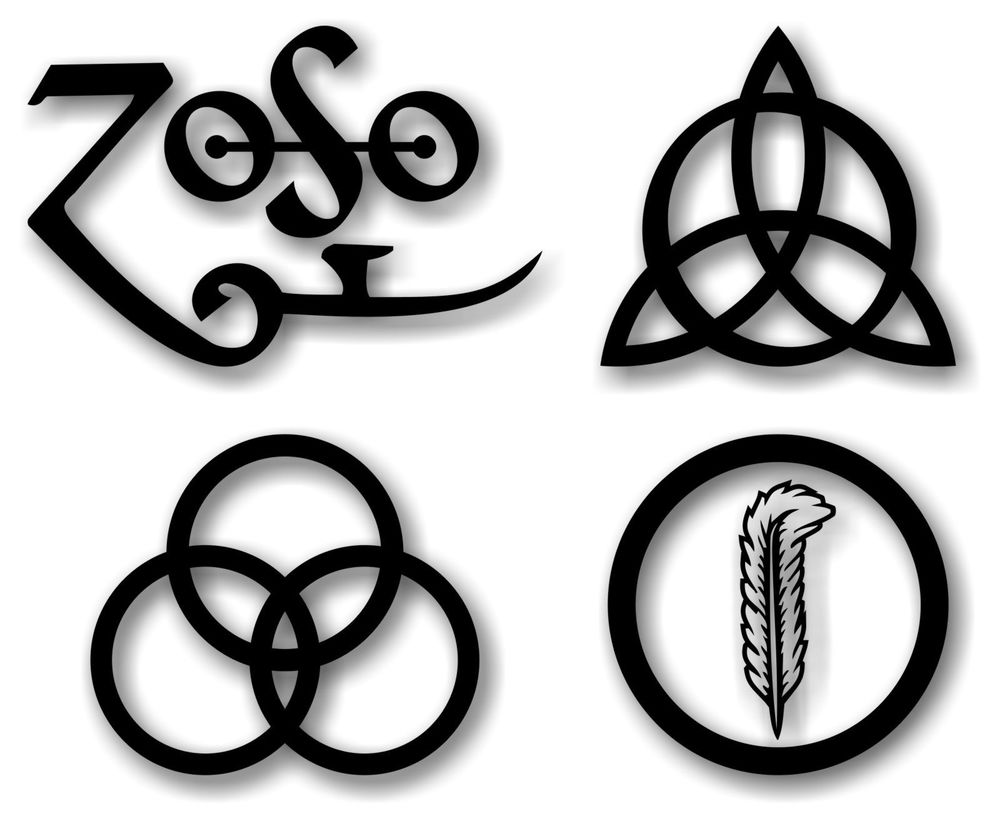 These symbols off of Led Zeppelins fourth album are burned into my mind from childhood. I must have seen them tens of thousands of times since then.

I do know that each symbol stands for a band member but what do they mean?

I have been told all manner of explanations and frankly I don't remember any of them.

Is there true meaning behind this symbology?

Notions of Satanic worship (of course) have run their way through the cultural explanations but I'm very skeptical of these religious sources.

Can anybody provide citations or explanations regarding the true meaning of these symbols?

Plant, Jones and Bonham have long been explained. The answers on the Wiki page are canonical.

Jones' symbol, which he chose from Rudolf Koch's Book of Signs, is a single circle intersecting three vesica pisces (a triquetra). It is intended to symbolise a person who possesses both confidence and competence. Bonham's symbol, the three interlocking (Borromean) rings, was picked by the drummer from the same book. It represents the triad of mother, father and child, but, inverted, it also happens to be the logo for Ballantine beer. Plant's symbol of a feather within a circle was his own design, being based on the sign of the supposed Mu civilisation.

Page, supposedly, told Plant one night after a few drinks, and Plant promptly forgot the explanation.

What we do know is that Page's symbol can be found on page 31 of the book Le Triple Vocabulaire Infernal Manuel du Demonomane, published 1844. 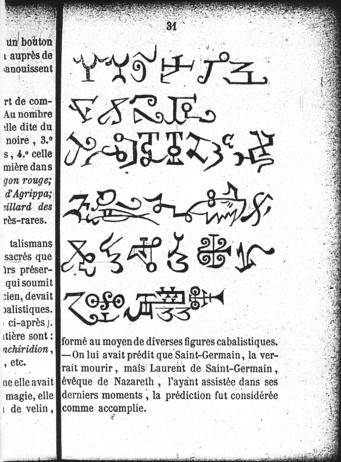 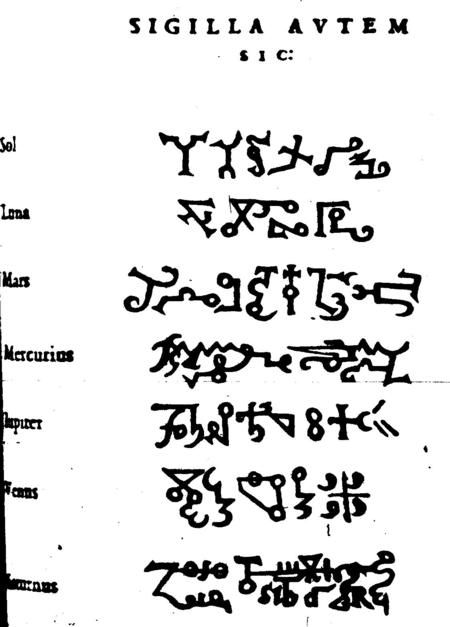 It's believed that this is a combination of two "sigils"; a "Z" indicating "Capricorn", and "oso" indicating "Saturn". This would relate to Jimmy's birth Astrology.

Again, since this isn't canon I can't say with 100% certainty this is true, but it's difficult to imagine that his symbol wasn't borrowed in any way, shape or form from Le Triple Vocabulaire Infernal Manuel du Demonomane.

Jimmy Page is on record saying that he had felt dissatisfaction, and furthermore received complaints and criticism, regarding the liner notes and written information printed onto the packaging of the band's three previous albums. He decided to respond to this by putting out a fourth Led Zeppelin album that would be as entirely devoid of any written explanations as he could devise. It would have no title whatsoever, have no words printed anywhere on the external packaging, and as few words as he could possibly get away with on the paper album sleeve. He even went so far as to refrain from naming the band members themselves.

Central to this strategy was the four symbols: He asked each member of the band to chose a simple hieroglyphic-like symbol to stand in for that band member's name.

The whole undertaking was an artistic statement, or the lack of a statement, if you like.

In the ensuing 45 years, various explanations have come to light, some reluctantly provided by the band members themselves in various interviews. To address your points and questions:

Each member of the band chose a symbol to represent himself.

It is well-documented that Jimmy Page was a serious lifelong student of the works of spiritualist/occultist Aleister Crowley. Page would of course have also studied earlier occultists who influenced Crowley. If this is what you mean by "religious sources", it is true. It is likely that this influenced Page's choice of a symbol for himself. I have not read that any other member of Led Zeppelin studied Aleister Crowley, so it's not likely that the other three members of the band chose their symbols based on that influence.

It is fair to say that the members of Led Zeppelin wanted a bit of mystery around these symbols, which is probably why they did not explain them at the time. They chose to use these symbols on the paper sleeve that holds the vinyl album only. Their use of these obscure symbols, and the lack of written words where they would be expected, seems to state that they want the music to speak for itself without comment.

In order to sell this record album in stores, there had to be some way of labeling it or cataloging it, so Atlantic Records affixed stickers to the exterior of the plastic shrink-wrap sealing the cardboard album package, providing a track listing, the record label logo and the stock number. Once the customer purchased the album, they would have to cut open the plastic shrink-wrap in order to unseal the album and open its gatefold to see the artwork on the inside. Most customers would discard the shrink-wrap, meaning that they would lose the stickers and be left with an album package that said absolutely nothing on the exterior or the interior. The only printed information was on the paper album sleeve; minimal notes with track listing and the names of recording studios on one side, and the lyrics to "Stairway to Heaven" on the other side. The names of the members of Led Zeppelin, as band members, are not mentioned anywhere; guest singer Sandy Denny is named (and given her own fifth symbol). The production credit is "Produced by Jimmy Page; Executive Producer, Peter Grant". The artist who did the interior gatefold illustration, Barrington Colby, is named. These names were probably stated according to the expectations and dictates of copyright law; they are the only personal names of people given.

Finally, on the back side of the paper album sleeve, there are the lyrics to the song "Stairway to Heaven". Notably lacking is the customary printed copyright notice for the lyrics; the name of the person or persons who wrote the lyrics is absent also. (Although you can be sure that the publishing company asserted that copyright and defended it, and still does) 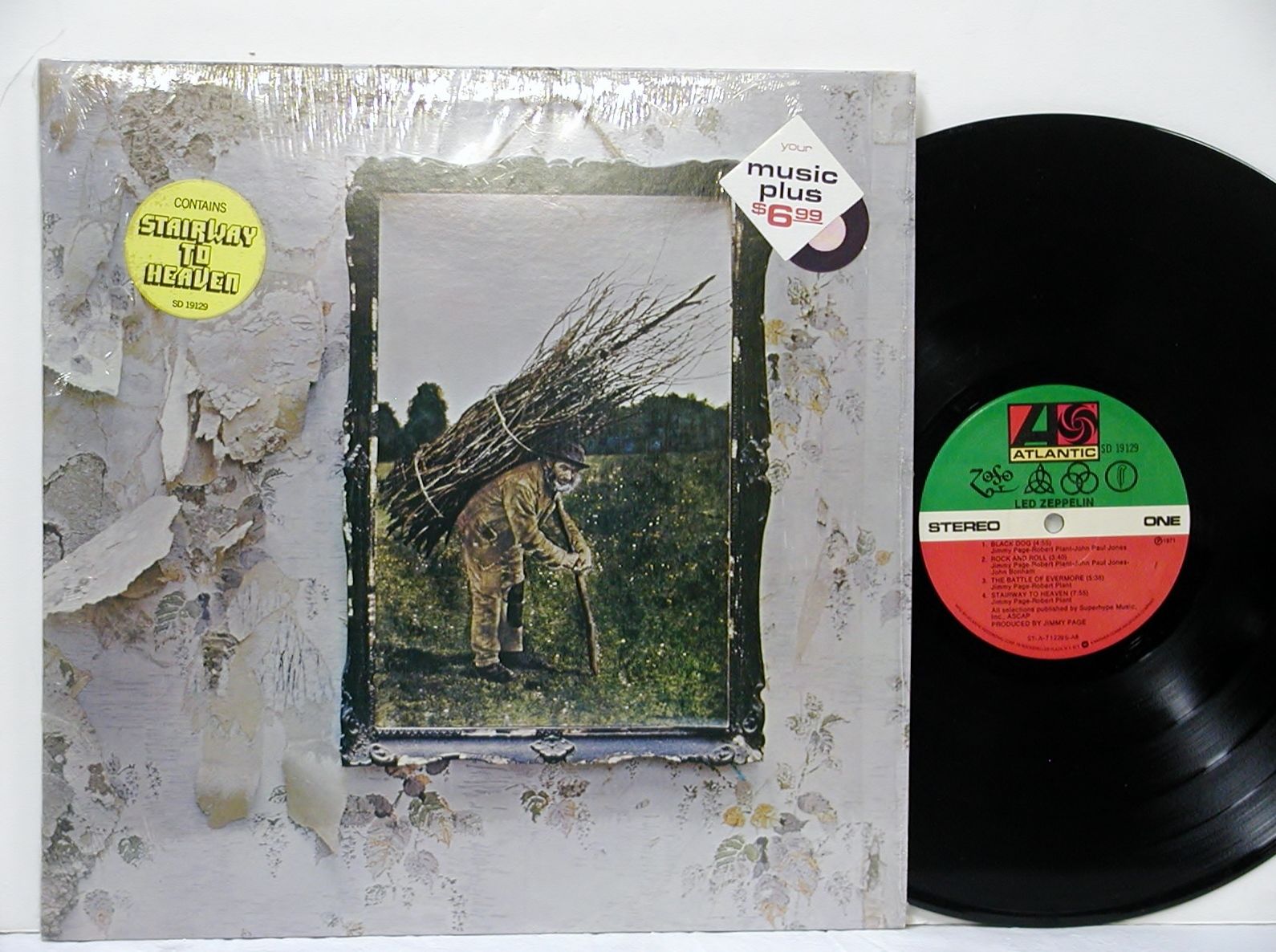 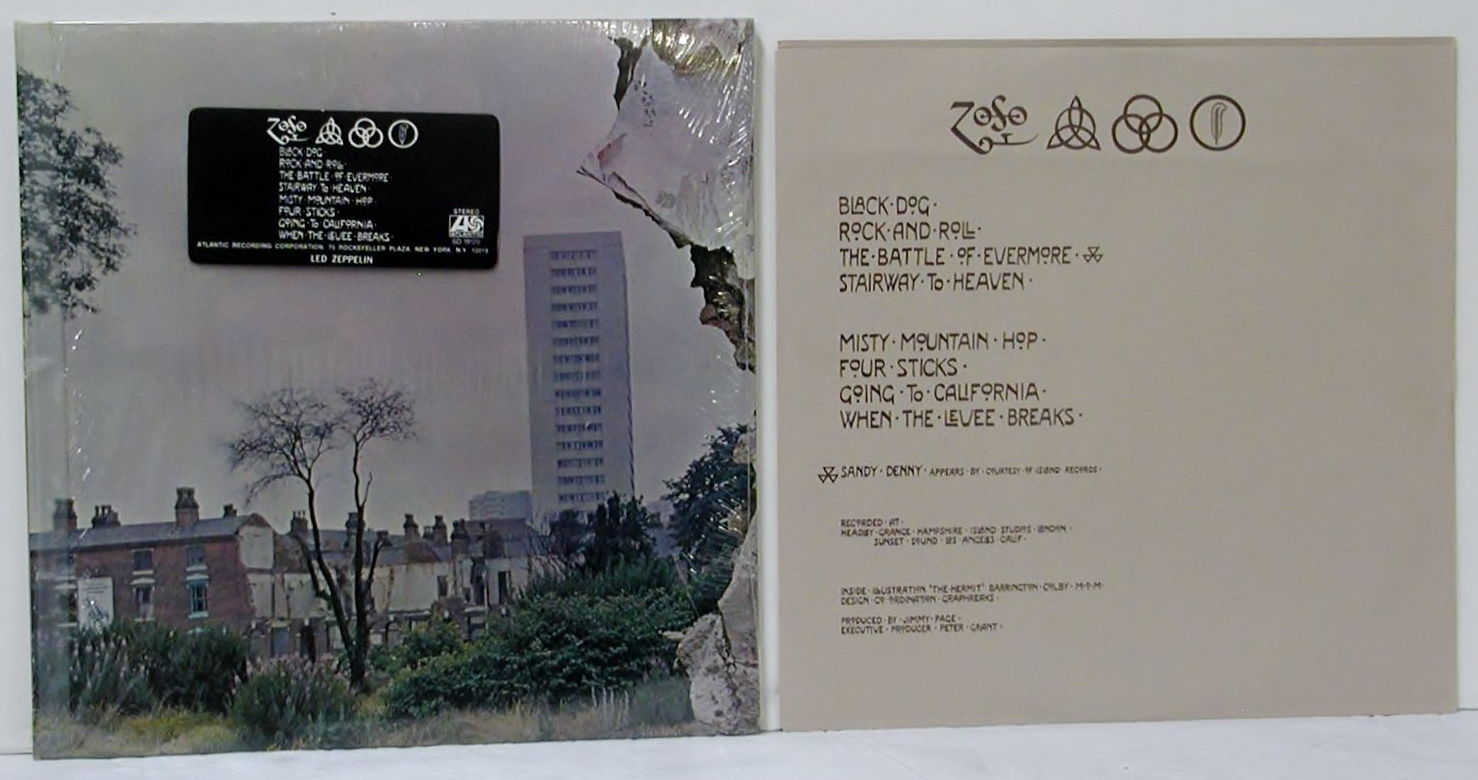 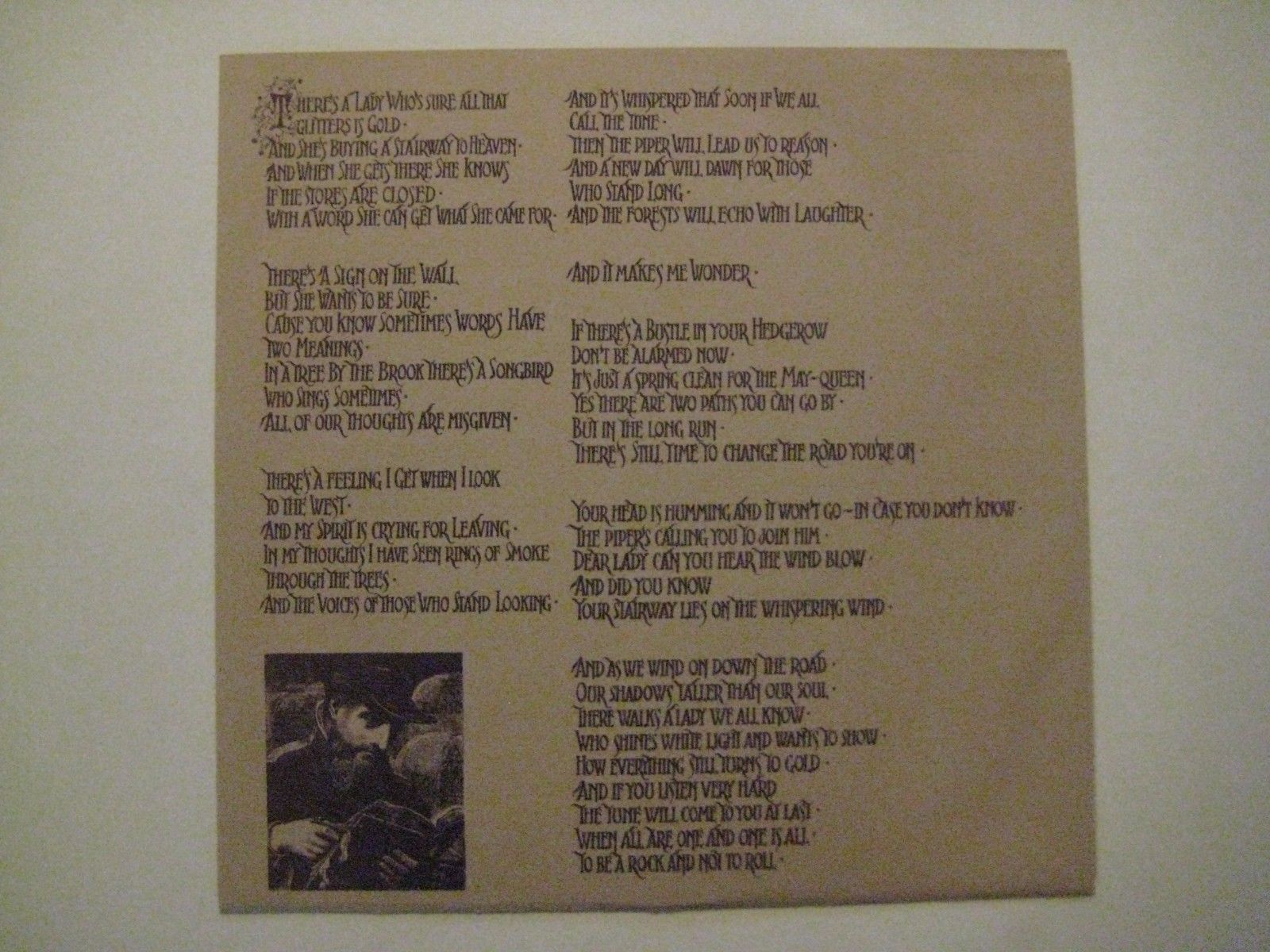 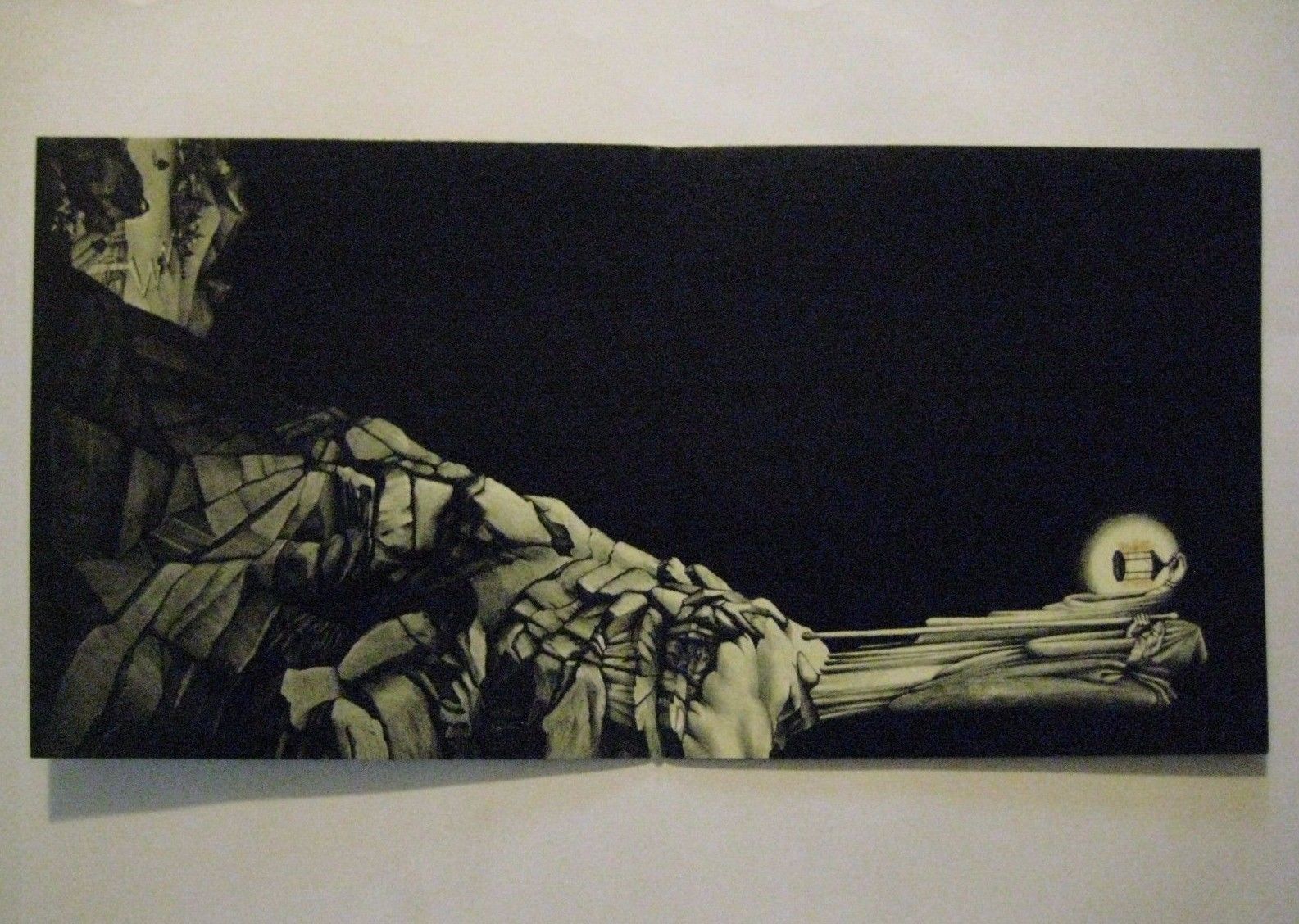 Not the answer you're looking for? Browse other questions tagged album artwork or ask your own question.