Since when/Why is the girl from ipanema the go to elevator music?

Why and since when is the girl from ipanema one of the most played music when people speak about elevator music ?

The Girl from Ipanema was popularized in the US in the 60's by the saxophonist Stan Getz as part of his Bossa Nova influenced Jazz approach.

Getz had a lyrical approach to playing the sax, cultivating a warm, mellow tone. In the 60's he got very interested in Brazilian music, particularly Bossa Nova, a slow tempo derivation of the syncompated Samba. He was very influenced by and adapted songs from the "fathers" of Bossa Nova, João Gilberto and António Carlos Jobim, doing a number of recordings under such influences. Matters of good taste appart :-), many of these works, with the slow syncopated tempo of the Bossa Nova and the lyrical melodies played by the mellow Getz's sax, already had most of the ingredients for the so called "elevator music".

The most successul and well acomplished recording of this period, still today regarded as a classic, was the 1963/64 collaboration with Gilberto and Jobim simply named Getzs/Gilberto. 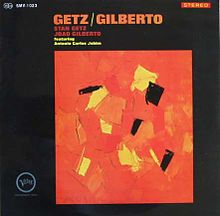 This album was a huge success, both commercially and critically, winning several awards (some never before attributed to a Jazz recording). One of the tracks was The Girl from Ipanema, sung by João Gilberto (part with the original Vinícius de Morais' lyrics in Portuguese) and his then wife Astrud Gilberto (part with lyrics in English).

Latter in 1964 a single was made from that track, keeping only the English lyrics sung by Astrud, and it was a huge success becoming a gold record and hitting the tops all over the world. "In the US, the single peaked at number five on the Billboard Hot 100, and went to number one for two weeks on the Easy Listening chart." [wikipedia]

So there you have it, although pursuing an artistic vision and keeping with recognized high aesthetic values, Getz and the Gilbertos produced the first piece of elevator music that seemed made to order...

9
When was the first use of broadcast or live performance where singers lip synched?
7
When was blues first called "the Devil's music"?
31
Why doesn't anyone write great symphonies any more?
3
When did the Goombay genre start?
2
Genre of "This Loneliness" from *The Godfather* (Carmine Coppola)
0
What are some bands similar to, the swing revival band, Big Bad Voodoo Daddy? Since this a revival band, whom are this band imitating?
4
Why is Kenny G so hated among jazz musicians? Are there objective reasons behind the hate?