How to determine the genre of a song?

I listen to many songs and I always wonder how the genre of a song is determined. Is it by listening to the song, or by the song's info like the artist, year released and so on?

The description of a genre is a collection of patterns. Songs that share patterns can be grouped in a genre that describes those patterns. You can find these patterns in any music dynamic: rhythm, speed, progression, key, instrumentation, whatever.

You determine the genre of a song by identifying these patterns, and associating them with the description of a genre.

For example, let's create two genres: fast music and slow music. Any music below 120 bpms (beats per minute) is slow music, anything faster belongs to the fast music genre. Listen to X song, count how many beats you heard in a minute, and group it the genre it belongs to. Genres work exactly like this, but with many more associated characteristics.

There is no harmonic movement, with some melodic movement, which repeats through the song. The movement is injected through the timbre of the melody part, and the percussion part. There is little variation through the song, with no distinctive sections. This song is a good fit for our simplified techno definition.

Now listen to this:

There is harmonic and melodic movement. It has distinctive sections (intro, break down and start of build up at around 3:50, climax at around 5:30, outro). A lot of reverb and delay is being used. This is a good fit for our Trance genre, even if it doesn't feature pads.

Sometimes it's hard to draw an objective link and define a genre objectively, so the genre subject is often a source of debate.

Since musicians can be very creative, not all songs have a specific and defined genre. Some are a combination of many, others present a new pattern with no associated genre at all (for example, in our fast-slow music example, what do we do with songs that have no evident tempo, or songs with variable speed, or a song that can be described at more than one speed like 80 and 160 bpms?). In contrast, there are songs that share well-defined patterns (by tradition, convention, influence, whatever) and are easier to catalog.

Have fun navigating the website, it's one of my favourites by far.

I will be simple... year does not matter much... it's more about the types of samples you use and the type of instruments and sounds you use. The only problem with your sample tracks (not mocking you as you did great explaining it) above is that you picked a Detroit techno track (WHICH IS FINE); however, there are many sub-genres the fall under techno... location of the creation also influences the genre choice.

Genre is based on year, location and most importantly it's strongly based on the sounds you use to create the track (e.g, type of snare, cymbals, shakers, kicks, hi hats etc...) However, This is not always as clear. Sometimes one genre is almost exactly the same as one another.

One easy and direct way of finding the genre of a song is to search for it at Discogs. The most specific genre will be listed under "Style": 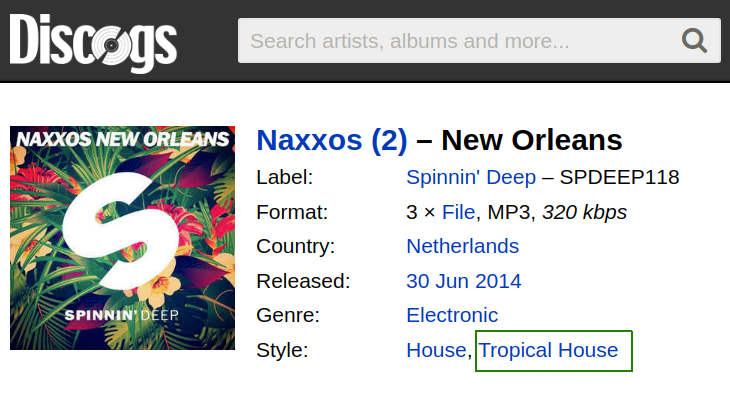 Discogs is crowsdourced (like AllMusic), so the genre is the opinion of the person who contributed the entry.

Note that some songs aren't available (e.g. Nora En Pure - Don't Look Back), or they're part of albums and you can't find the individual track genre (Coldplay - Arm of One).

None of the previous answers actually addresses the question of determining the genre of a particular song. Here's one way to do that:

Organize Your Music will analyze the playlist and show the genre of each song:

OYM is open source. How exactly is works is that it fetches the genres of some album the song is in (if any - I have yet to seen the Spotify API return any genres for any album), then those of the artist, and returns the first genre from that list. Spotify doesn't supply per-track genre information, so this is the best that can be done using the Spotify API. Note also that Spotify considers "edm" a genre, when it's actually an umbrella term for electronic music in general (contemporary mainstream club stuff).

You can also use it to analyze your entire music collection on Spotify. Interesting to see which genres are most represented.

6
Is there an easy process to figure out a song's specific genre?
2
What features make up a genre?
1
How do I know which type of music have I created?

10
Does a genre describe an artist, a song, or both?
10
Definition of the cyberpunk genre?
17
Is there In English a music genre characterised by long songs? Similar to Tarab
9
Material for rock history
1
What genre is Preserved Valkyria
2
Correct genre for songs with "passive" vocals
2
How to find your music genre? (to listen to)
1
What genre is "Dragonborn" by Jeremy Soule?
0
What is the genre of Breakup by Aaron Zigman