I'm looking for a song that I had seen the music video of (on MTV I think) as a child. I've been going through playlists on YouTube and some articles on MTV, but couldn't find it yet. I don't remember the melody, most of the lyrics, no names or anything.

What I do remember is this one scene that's stuck in my mind:

A small stage, cables are lying around everywhere, a male singer in the foreground playing a guitar, I THINK there was also a woman standing a bit behind him. There was also a big screen in the background and I recall one portion of the song where the guy sings "[...] of your heart" or something close to that and on the screen in the background you could see an actual heart. Just from my own description I assume the genre is electronic. 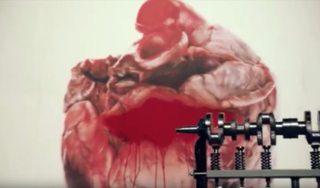 The 1993 Sting song Shape of My Heart has a video featuring the (male) singer playing guitar, on a stage filled with instrument cables and the repeated lyric "that's not the shape of my heart."

There's also a small computer monitor visible in some shots in the background, but no actual heart displayed on the screen. However, the pulsing of the display due to the screen refresh does vaguely resemble a heart pumping.

The video for Savage Garden's "I Want You" features a stage, a big screen, lots of indistict electronic equipment and lots of white, but no heart.

I think that may not be what you're looking for, though, because that heart rings a very faint bell. Was there a part of the video where Young Hip People in bright Young Hip People clothes were using a computer to design a human?

Not the answer you're looking for? Browse other questions tagged identify-this-song identify-this-video or ask your own question.