Ask Question
Asked 4 years, 3 months ago
Modified 7 months ago
Viewed 119 times
5
This question was closed because it is about identifying an artist, song, or genre of music, which is considered off topic It is not currently accepting answers.

Questions asking for music identification have been determined to be out of scope for the site as explained in this meta discussion. Questions like this may be asked in Music Fans Chat. If this is not an identification question, please help the user edit their question to make it clearer.

According to the information I have found on the album cover and on the Internet, these were the performers (correct me if I am wrong):

Who played Normanno? Could it be Franco Ricciardi playing two roles? (Arturo and Normanno)

The album's catalog number is OPD 1492 (Opera D'Oro is the label and 1492 the release number). I have found a couple of different releases of the same recording, by different labels. For example, released by Myto Historical with number #00207.

You can see Normanno is missing or appears as "N. N.":

It seems it might have been Franco Ricciardi, playing two roles (Arturo and Normanno).

In the MYTO 2009 album release back cover it seems to appear his name: 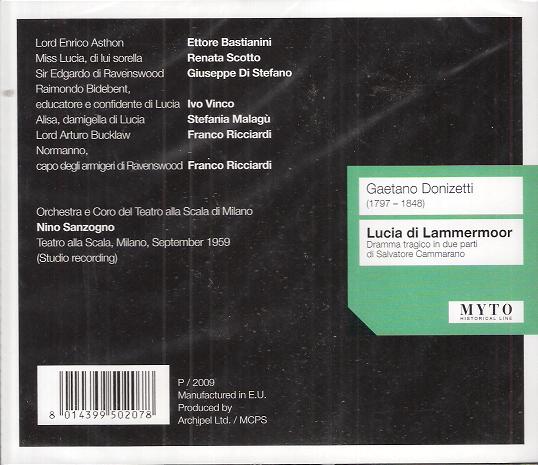 Another reference can be found in esdf-opera.de.

That is definitely the case that Ricciardi doubled up the roles of Arturo and Normanno, as this was a studio recording, not live as is sometimes mistakenly claimed, and anyone with good ears may hear that it is the same voice.

Not the answer you're looking for? Browse other questions tagged identify-this-artist opera or ask your own question.

4
Who played bass on George Michael's "Cowboys and Angels"?
0
Who is Louis Solito? (17 time Grammy Award winner)
2
Who played lead guitar on "River in the Rain" by Roger Miller?
1
Who is Patchai ("Gitan")?
4
Who was Samuel M Johnson? (Einstein on the Beach)