Are “We are the World” incomes still sent to Africa?

The famous song by USA for Africa We are the World was initially written by Michael Jackson and Lionel Richie to earn funds and help Africa.

The song is still popular today (occasionally played on radio or on streaming services, covers...) and hence generates royalties. Is that money still sent to Africa?

Yes, very much so.

I don't think that the previous answer is totally correct. The statement posted is valid enough, but it only extends to Jackson's own royalties due to him as a songwriter. It does not cover Lionel Richie's rights as co-writer, nor the record company' publishing rights.

It's not clear whether this legal directive was binding on the 2010 re-release. This notice from USA for Africa shows that some royalties, at least, were still supporting Africa:

Once again, USA for Africa has assembled a stellar line-up of international artists to contribute songs to the project with proceeds from this effort going to assist Africa and Africans with the current challenges facing the continent.

This Chief Executive statement makes it abundantly clear, beyond doubt, that royalties, even if Jackson exempted his own, are still supporting Africa:

“We want to thank you all –individuals, groups, schools, churches, companies – located throughout the world who supported our efforts in 1985/86 and throughout the last 33 years, through the simple action of buying the song, “We Are The World” in all its forms.

No, not any more

According to this Michael Jackson fan website http://www.mjjcollectors.com, this topic was specified in an agreement dated March 4th 1985. This letter signed by Michael Jackson states that the agreement lasted 18 months. 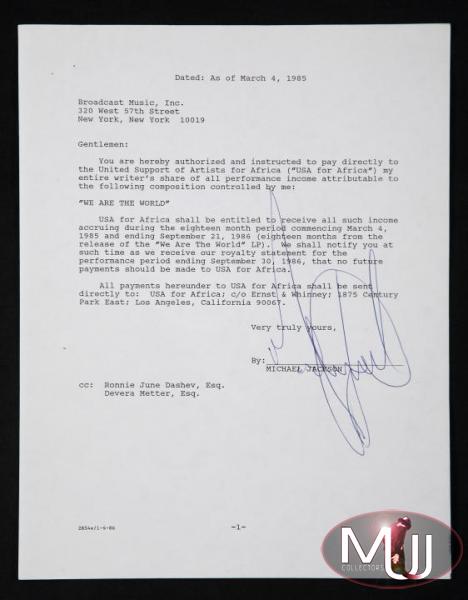 USA for Africa shall be entitled to receive all such income accruing during the eighteen month period (. . .) no future payments should be made to USA for Africa.

USA for Africa still exists today, and I suppose they work with other sources of income.

Not the answer you're looking for? Browse other questions tagged music-business michael-jackson royalties or ask your own question.

13
What were the specifics of Prince's “$100 million contract” with Warner Bros. Records in 1992?
16
In which countries does the music business contribute most to the economy?
7
Lyrics for the rap in “She Drives Me Wild” by Michael Jackson
8
Why do record labels still exist?
7
In Michael Jackson's song Thriller, what is the bird cry at 3:11?
2
Why would a record label license a recording but not allow the performer to be named?
7
How are band names protected?
4
Why are there so many “featurings” in released singles nowadays?