I'm trying to identify a song featured during a dorm party scene of an episode of the TV series, Felicity.

The episode it is titled, Hot Objects (1.03) and the party scene features several transitions between 3 or 4 songs, before finally Felicity's "tape" is played instead of music.

Additionally the song I'm looking for is on the DVD-version ONLY, as the original airing soundtrack had to be changed upon home release due to copyright issues. 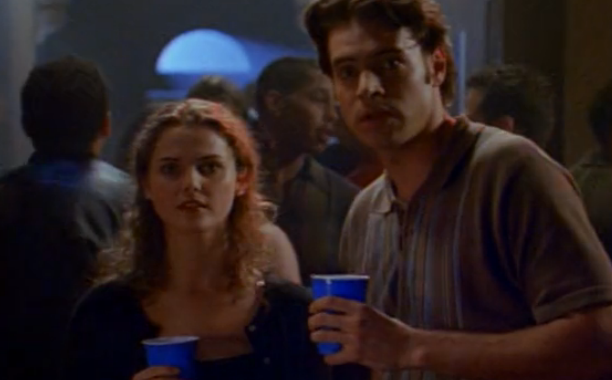 Don't know how long it will stay up, but I found the episode with the right music! However I think the audio is bit slower than it ought to be, but the song I'm looking for starts @ about 36:22 and goes to about 37:12.

Not the answer you're looking for? Browse other questions tagged identify-this-song soundtrack or ask your own question.

2
Looking for a famous song with a violin plucking and a female choir
2
Song playing in Lift Me Up first dance scene
3
What's that song Haley was listening to in the truck, on episode 8 of season 4 of Halt and Catch Fire?
3
Identify soundtrack from "Jiro Dreams of Sushi"
2
Operatic aria from the end scenes of "Combien tu m'aimes" (2004)
3
Looking for a 90's or 00's song, female singers - ""Oh nananananje"
1
Looking for an early 90s pop song