What does the song 'Year of the Cat' by Al Stewart mean?

What does the song 'Year of the Cat' by Al Stewart mean?

I just found this song and I'm curious how the song can be interpreted? I'm not sure if I understood it well. It sounds like a song for a lover or something but I could not understand the significance of the 'Year of the Cat', especially since there is no year of the cat that I know of.

My interpretation of the lyrics are a combination of ideas that play on zodiac signs, film noir/vintage espionage crime drama, and being seduced by a dangerous women, where the main character is blind-sided by a women, and in which he usually doesn't fall for just one woman ("you've thrown away your choice").

The year of the cat for instance is not a real zodiac sign in either western or Chinese zodiac, but cats themselves are often symbols of power relating to seduction, mystery, and magic and have been culturally worshiped (ie: Ancient Egyptian Goddesses) or feared (ie: Middle Ages Christian beliefs centered on black cats being bad luck).

However, they are featured in Vietnamese Zodiac where the cat corresponds with the Chinese' Zodiac's Rabbit, which happens to be the year the song was recorded in.

But really, the idea behind the zodiac or really, horoscopes, is that a person is born with certain traits and that they may have a semi-predetermined "destiny". In the Chinese Zodiac people also often look to the zodiac year, hence the man in the song can not fight his urges for this women, because it's 'the year of the cat'. It's a metaphor for the time he was seduced by this women, the women being symbolized with the cat...

This may be alluding to the film, The Maltese Falcon where actors Lorre and Boggart worked together for the first time. It's a film nior film about a private investigator, a feminine fatal, and a jewel-encrusted falcon statuette.

The Maltese Falcon is a 1941 film noir with screenplay by and directed by John Huston in his directorial debut, and based on Dashiell Hammett's 1930 novel of the same name. The film stars Humphrey Bogart as private investigator Sam Spade and Mary Astor as his femme fatale client. Gladys George, Peter Lorre, and Sydney Greenstreet co-star, with Greenstreet appearing in his film debut. The story follows a San Francisco private detective and his dealings with three unscrupulous adventurers, all of whom are competing to obtain a jewel-encrusted falcon statuette.

However, Peter Lorre and Humphrey Boggart also went on to do more iconic romantic adventure film noir, Casablanca, which is more likely what the song is referring to. 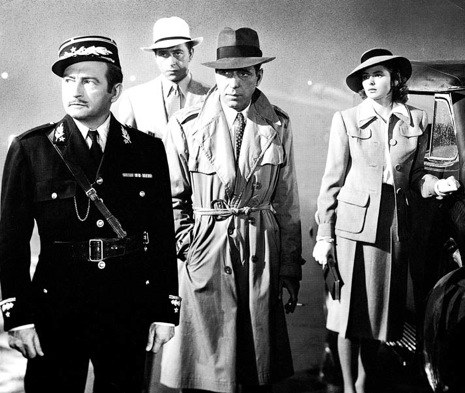 Casablanca is a 1942 American romantic drama film directed by Michael Curtiz based on Murray Burnett and Joan Alison's unproduced stage play Everybody Comes to Rick's. The film stars Humphrey Bogart, Ingrid Bergman, and Paul Henreid; it also features Claude Rains, Conrad Veidt, Sydney Greenstreet, Peter Lorre, and Dooley Wilson. Set during contemporary World War II, it focuses on an American expatriate who must choose between his love for a woman and helping her and her husband, a Czech Resistance leader, escape from the Vichy-controlled city of Casablanca to continue his fight against the Nazis.

While listening to the song (which I have never heard before, but I really like it, so thank for this), there are something about the instrumentals that are reminiscent to both 70's romance and crime drama films, but also has some throwbacks to something more jazzy, if you will.

The following however is the interpretation the Year of the Cat Wikipedia page states,

Co-written by Peter Wood, "Year of the Cat" is a narrative song written in the second person whose protagonist, a tourist, is visiting an exotic market when a mysterious silk-clad woman appears and takes him away for a gauzy romantic adventure. On waking the next day beside her, the tourist realises, with equanimity, that his tour bus has left without him and he has lost his ticket.

So the man in the song is also meant to be a literal tourist and not just a metaphor for being out of his element. This kind of points stronger to Casblanca IMO, as the characters in the film have to present "letters of transit".

I think the song is an analogy for a staid, conservative man having an affair (contemplating a crime) with a flamboyant, free spirited woman (silk dress running like a watercolor in the rain) who shows him a secret world which he's never even dreamed of (hidden door) or maybe just forgotten from his youth (turn back time). After the initial rush, it's morning, and the man realizes he can't go back to his former life, and possibly wife, (thrown away your choice, lost your ticket) , and even though he knows it's never going to last, for now he's gonna stay. I identify with this song, because I think I lived it - and loved it!

It's a ballad: a song that tells a story. Although the title and refrain ("Year of the cat") is an arcane reference to zodiac-esque themes and there are allegorical references ("a morning from a Bogart movie" and "you go strolling through the crowd like Peter Lorre contemplating a crime"), it's not metaphorical but literal. The overall theme is one of mystical eroticism.

The tourist is visiting a foreign, somewhat non-modernized country which, though unnamed, is strongly implied to be in the Mediterranean, i.e. Algeria as evidenced by "blue tiled walls." He is seduced by a mysterious, exotic woman. The Peter Lorre refference describes someone prone to hedonistic pleasures so it's likely he was selected by the woman who observed and identified him as a receptive, willing mark for her seduction.

The night of passion and overall allure of the woman lures him into abandoning his tour bus and staying on with her. He knows there's something 'not quite right' about the woman who is very secretive and he knows it won't last ("you're bound to leave her") ...but there's no definite end in sight. The song just sort of trails off with ambiguity and the listener suspects the man may wind up staying with her a lot longer than he knows.

There are echoes of stories about supernatural beings, usually exotic, irresistible women, who seduce mortal men and cause them to leave their 'safe' lives behind and cavort with them. Such stories are found in Celtic tales about fairy women and mermaids and Greek mythology about succubi and sirens, etc. The men often realize it's to their detriment, even fatal, to succumb but can't resist the bewitching charms of the woman.

13
What is meant by "Grandma Plays the Numbers"?
17
Are the lyrics in "Teardrop" by Massive Attack "feathers" or "fearless"
16
What does "bismillah" mean in the Bohemian Rhapsody?
6
Who or what is the mother of pearl?
6
Meaning of the line "reds and the pinks" in Love Stinks
0
What does "you're every song" mean?
2
Anyone have lyrics to "Ich schenk dir mein Herz" by Peter Reusch?
5
Does anything in Elton John's "Daniel" actually/specifically reference war, or Vietnam?
0
What does 'imagined ecstasy' mean?