Chopin wrote a plagal cadence at the end of his Scherzo No. 1 that resembles a final "Amen" on a choral hymn. Was he a Christian?

Chopin's Scherzo No. 1 in B minor concludes triumphantly via a bold plagal cadence of C♯m7(♭5)/B-Bm, which is ii∅4/2-i in B minor. This final cadence sounds very much like an "Amen" at the end of a choral hymn song, as a final "Amen" is written as a plagal cadence with two syllables. 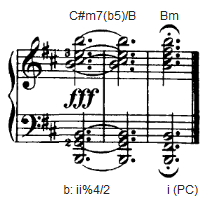 Because of this, I am starting to wonder if Chopin was a Christian. Is there really any evidence that says he actually was?

Frederik Chopin was almost certainly born and bred as a Catholic, as were almost people in Poland during his lifetime. His father, Nicolas Chopin, was a Frenchman from Lorraine who had emigrated to Poland in 1787 at the age of sixteen. Frederik was baptised on Easter Sunday, 23 April 1810 in the same church where his parents had married, in Brochów. The parish baptismal record cites his given names in the Latin form Fridericus Franciscus, which strongly implies a Catholic church. But even though he grew up Catholic there is little evidence that he was strongly religious. There are accounts that he had strayed from his religion, but returned to it on his deathbed.

But I wouldn't consider the use of a plagal cadence as any evidence of Christian religious affiliation. A couple of examples: Felix Mendelssohn, who was Jewish, wrote plagal cadences at the end of his overture to "A Midsummer Night's Dream" and at the end of the first movement of his 5th Symphony ("Reformation Symphony").