What defines swing as a music genre/style?

Which patterns are commonly found in swing music? Which are swing's key and defining characteristics? What makes a swing song a swing song?

"Swing" refers to a particular genre of jazz music for dancing a specific kind of couples' dance. The style of dancing is called swing dancing, also referred to as the Lindy Hop or the Jitterbug. It is extremely athletic.

The music written for this kind of dancing is associated with the big band jazz ensemble and styles of musical arrangement.

The original era of swing music was quite short. It started in the USA in the early 1930s but it was practically over by the end of World War II, in 1945.

Here is a perfect example from a Broadway movie of the era.

Here is an example of couples swing-dancing in a competition from 2013, accompanied by swing music played by a live band.

For the musicians among you, "swing" has a musical definition that has to do with the way that the beats in each measure are played.

The classic "swing" or "shuffle" rhythm is when the music is notated as pairs of eighth notes, but is played by transforming each pair of eighth notes into a triplet figure, like this: 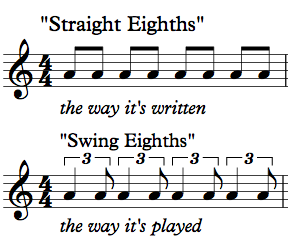 Bands can vary the degree of the transformation of the note values from "straight eighths" to "swung eighths", playing in a light swing or a heavy swing, for example.

Jazz bands have always referred to the strictly-notated "straight eighths" rhythm by the term ballad, to distinguish it from swing, as in "Hey, guys, this song is a ballad, so don't swing the off-beat eighth notes."

Not sure if there's a true scientific answer to this. In my opinion, I think a some of it has to do with the shuffle. This is when a pair of eighth notes, for instance, are played as a sixteenth and a dotted eighth. This brings a gravity to the to the second note. Add to that a leading eighth note, and that third note draws the listener to it. If we repeat the pattern, the leading note draws he listener "up" while the final note draws the listener down or home (usually on the 1 and 3 if we're talking about a 4-beat phrase).... So this up and down gives the rhythm a swinging pattern.

Not the answer you're looking for? Browse other questions tagged genre jazz style swing or ask your own question.