Did Handel's wine fuel his music?

We have several anecdotes and legends about the composer.

So I ask: was he an alcoholic or a workaholic?

His huge output and considerable anecdotal evidence point to the fact that George Frederick Handel was a workaholic, but there is little evidence to suggest he was an alcoholic.

The Handel specialist Dr. David Hunter of the University of Houston suggests he suffered from what we would now call a binge-eating disorder, defined in his day as an 'extraordinary appetite' and an 'inordinate extravagant hunger'. During his travels in Europe he incurred huge food bills. One anecdote relates how Handel had invited the painter Joseph Goupy (1689–1769) to dinner. After they had eaten Handel excused himself from the table and disappeared. After some time had passed Goupy went looking for him and found Handel in the back parlour stuffing himself with food. The next day Goupy produced a famous caricature of Handel: "The Charming Brute": 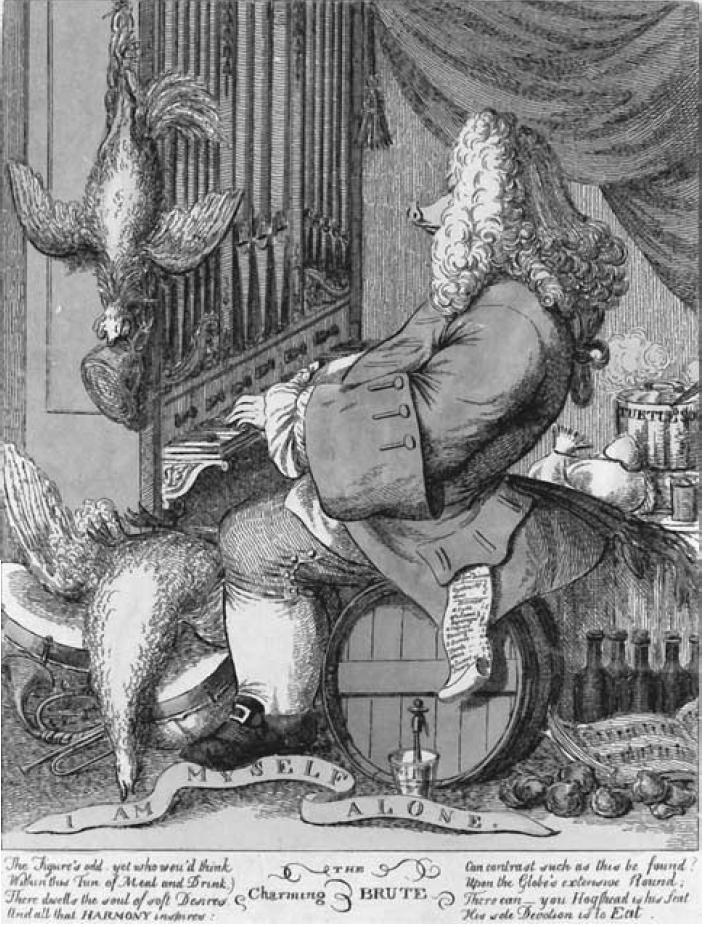 Needless to say, this was the end of their friendship.

Due to the amount of food he ate Handel became extremely obese. A Biographer John Hawkins wrote

He was in his person a large and portly man. His gait which was ever sauntering, was rather ungraceful as it had in it somewhat of that rocking motion which distinguishes those whose legs are bowed.

Handel drank copious amounts of red wine with his food but what ultimately ruined his health was not the wine itself but the lead that was added to the wine to reduce the action of vinegar-producing bacteria. Even though he lived to the age of 74 he suffered from lead poisoning and was blind for the last eight years of his life.

We always like to read these humanising facts about composers' lives: poor grumpy old Handel, threatening to throw sopranos out of windows; it wasn't his fault, guv, it was the wine. Thing is, lead or no lead, Handel didn't do badly by the standards of the early 18th century, making it to 74, albeit with eight crippling years of blindness at the end of his life.

With all of these details of composers' lives, we're really looking for excuses to explain the inexplicable. But in reality nothing solves the riddle of how Handel composed his astonishing operas or oratorios.

Btw: I didn't know that he was blind ...* with eight crippling years of blindness at the end of his life.*

16
How did music propagate before recordings?
9
Which artist has served front man in the most bands?
3
What did David Gilmour exactly say in this video about his Black Strat?
5
What does “classical” mean? Is Dvořák classical?
7
Was 2016 really a partcularly deadly year for artists?
9
When did Progressive Trance appear?
2
Did Ray Manzarek play a Hohner keyboard bass on a commercial recording or public occasion?