How does Skrillex perform live concerts?

I went to a Skrillex concert last year. When Skrillex performs live, what is he doing?

From this video we can see that Skrillex is using Ableton Live as a sequencer, but it is more accurately defined as a non-linear DAW (you can think of it as a very powerful hybrid of sampler, synth, mixer, and drum machine).

He is also using a M-Audio Trigger Finger as a control surface, which includes faders, knobs, and pads to control whatever you program them to control in Ableton Live. Maybe he bought this bundle: 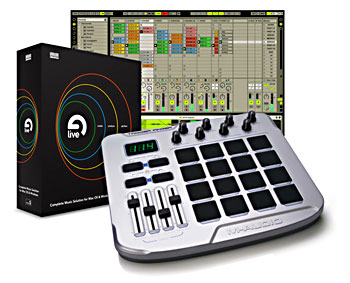 In general, that's what he is doing (ideally, more on that later). Using a control surface to control Ableton Live (if he is doing anything at all, electronic music has its own "lip-sync" issues). Inside Ableton Live you'll find synths, samplers, audio tracks, effects, and whatever audio processing and production dynamic you can think of.

What synths, effects, etc is he using? The video suggests that Skrillex is using one knob to control a stutter effect (Live's beat repeat effect, most likely), but it's hard to know for sure.

Because of some interviews (and this page, specifically) we know that he uses stuff like Massive (very common in Dubstep production), Sylenth1, and Reaktor. Through the Finger Trigger he probably controls things like envelopes, LFOs, delay times, distortion amount, etc.

With that said, without having the actual Ableton Live patch it is hard to be specific about what he is doing. The control surface might not even be connected and everything is already automated and/or pre-recorded. Or maybe he has intimate control of every single dynamic.

Not the answer you're looking for? Browse other questions tagged concert electronic-music skrillex or ask your own question.

2
What does a music producer do at a concert?

25
Who started the encore tradition at concerts?
11
Longest known live version of Dazed and Confused?
13
Why is Nickelback hated?
13
What was the last live concert the Beatles played together?
11
Term for PA music before a concert starts
2
Why do some artist have “live” listed with their name in concert line-ups?
2
What does a music producer do at a concert?
3
Does “computer manipulated gibberish” have a name?