What does "Fortune fame mirror vain" mean in Metallica's The Memory Remains?

The first two lines probably go together in a sentence as “Fortune, fame mirror vain” and can translate to “both fortune and fame mirror what is vain.” So this basically says that fame and fortune reflect false pride, or baseless pride. That one who has those things and waves them around do so to express how proud they are, but to no avail (another definition of the word “vain”). And then it goes to the next line, “gone insane”, to express how one goes insane from their false pride of fame and fortune, or simply grows too attached to the fame and can’t stand to lose it. However, they can’t get over this anxiety of losing fame because “[…] the memory remains”.

BTW the correct lyrics are (note the comma in the first line):

But the memory remains

As shown in this lyric booklet that accompanies a Japanese release: 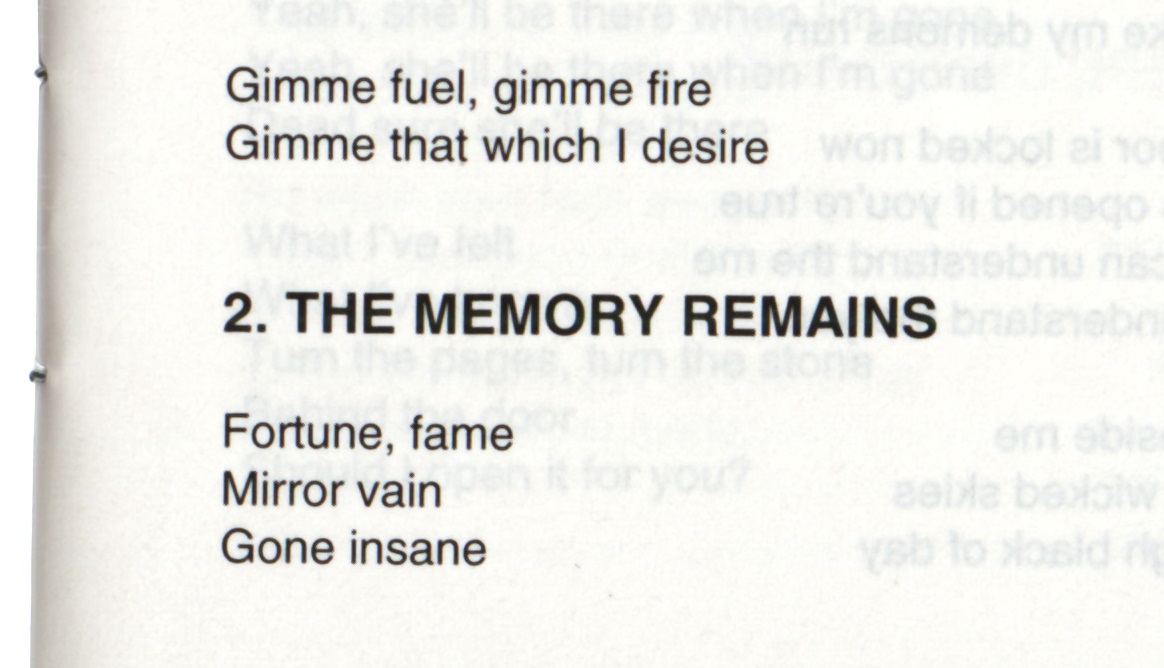 I'm utterly convinced that the lyrics have been mis-transcribed and vain is actually its homophone vein. I believe this for two reasons:

I think the actual lyrics are:

This would tell the age old story of someone getting famous, doing hard drugs, losing their minds but remembering most of the experience.

I've been a huge Metallica fan for nearly 25 years and the only thing that would convince me that these aren't the true lyrics, is if James Hetfield told me to my face.

If anyone has any YouTube footage of him stating that the lyrics are 'Mirror vain' I would love to see it but I will not accept written evidence to the contrary.

Sorry for being prolix but this has irritated me up for a number of years and I think it's the worst case of a mis-transcribed Metallica[1] lyric since So What? was claimed online to be "Well I've been to Hastings and I've been to Brighton, I've been to Eastport[2] too."

Not the answer you're looking for? Browse other questions tagged lyrics meaning metallica or ask your own question.

7
What does "Check the diagonal" mean in the lyrics to Freedom by Rage Against The Machine?
1
Who does the voice in Marley Marl's "Duck Alert?"
3
What is the meaning of this line in Loch Lomond?
3
Why are Zap Mama's Iko Iko lyrics so different and what do they mean?
4
What does the song 'Year of the Cat' by Al Stewart mean?
2
What does the line "Could go fishing but the fish draw flies" mean in Blaze Foley's "Big Cheeseburgers And Good French Fries"
4
What stock character/stereotype/thing does Cab Calloway imitate near the beginning of this 1950s "music video"?
0
What do the lyrics for Gnarls Barkley's "Crazy" mean?
0
What does "I'm a loser, baby, so why don't you kill me?" mean?